That’s what I would have said if anyone had challenged me about my supping of hot whiskeys at lunchtime on a Tuesday. As it was, I don’t think anyone in the vicinity was too bothered about my whiskey intake – possibly they were too busy downing hot toddies themselves. Besides, it was Dublin, it was January, it was cold. And the whiskeys were free. I really don’t think you need any more excuses than that.

The whiskey in question was Bushmills (a fine example of the breed) and was laid on at the launch event for the Temple Bar Trad Festival, which will be filling the city centre of Dublin with traditional Irish music in great quantities at the end of this month.

And, really, there is no more appropriate thing to do while listening to traditional Irish music than sink a dirty great big pint of Guinness or nurse an Irish whiskey, all the while ensconced in the cosy familiarity of an Irish pub. It’s no surprise, then, that Bushmills are major sponsors of Trad Fest, which, among other things, will feature a well-packed pub trail. 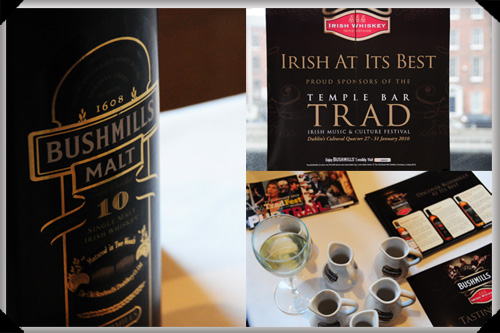 Temple Bar Trad, coming your way from the 27th to the 31st of January

For my part, I was so happily reminded of the joy that is hot whiskey by the event that I went a-baking with the flavours of hot whiskey in mind. The result? A whiskey apple pudding with hot whiskey sauce, which will get a post all of their own in due course. Meanwhile, it’s time for another hot whiskey, methinks.

By the by, nominations are open for this year’s incarnation of the Irish Blog Awards. I did rather well last time out. So off you pop now, over here, and nominate your, ahem, favourite Irish food/drink blog.

And if you’re looking for the blog contact details that they ask for, that’ll be editor [at] thedailyspud [dot] com. I even have a contact name (other than Spud), which is Aoife. Then have a hot whiskey as a big ol’ thank you. 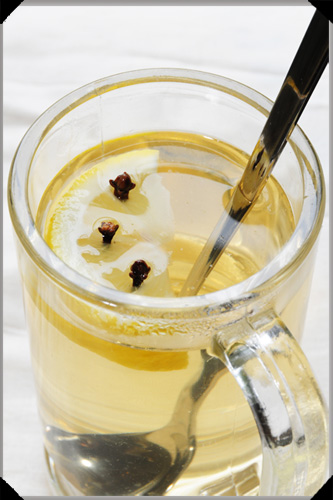 It’s simple, really. Take however much whiskey you’d like, dilute with as much boiling water as you’d like, adding a touch of sugar, lemon and cloves. You need more instructions? Alright, then…