“So, have you done neeps and tatties, then…?”

My colleague was not referring to some strange ritual, but simply wanted to know if I had given the legendary Scottish combination of turnip and potato the Daily Spud treatment, to which I had to answer, well, no, not yet. Until today, that is…

I should first clarify that what the Scots refer to as neeps, or turnips, are what we in Ireland commonly call turnips, but go by the name of swede in England and rutabaga in the US (confused yet?). The turnip I’m talking about is yellow-fleshed and sweet. Here’s a picture, which may be useful for identification purposes later. 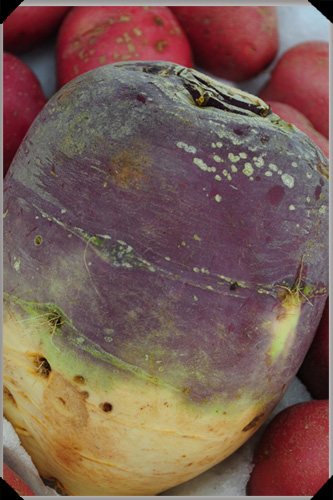 Exhibit A: one neep, several tatties

When the Scots talk about neeps and tatties, they mean (yellow) turnip and potatoes, boiled and mashed separately, and traditionally served with haggis as part of a Burns Night supper. I was reminded of the combination when I found myself with a profusion of turnips, due to the fact that they have been turning up, as is their wont, with great regularity in my organic vegetable deliveries.

Now, it has to be said that turnips are not the most popular of vegetables, and I have reported on my difficulties with said vegetable previously. However, I know (as the Scots do) that turnip and potato are good pals and figured that it was about time I tried something a little different with the pair of them. So away with the masher and, instead, I came up with a gratin featuring neeps, tatties and a few, perhaps less traditional, ingredients. Not sure what the Scots would make of it, but I rather liked it all the same. 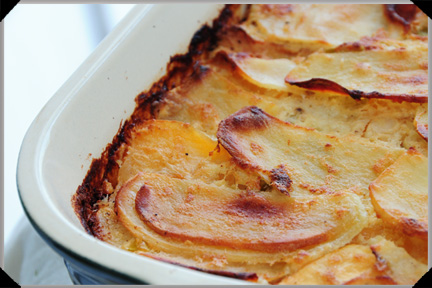 Take a very simple gratin of potato, milk and butter, like the one described by Deb at Smitten Kitchen, add yellow turnip (not such an unusual thing to do) but also throw in some lemongrass, ginger, spring onion and yoghurt (somewhat less than usual, methinks) and you end up here. Which is to say fairly far away from the Scottish notion of neeps and tatties.

The main flavour is the lemongrass, backed up by the ginger, which together provide a nice contrast to the turnip’s sweetness. In this, I took inspiration from Carmel Somers of the The Good Things Café in West Cork, who suggests the turnip plus ginger combination. It’s a fairly light dish, lacking the cheese and/or cream you often find in potato gratins, and using milk and yoghurt instead. And, sure, no harm in that.