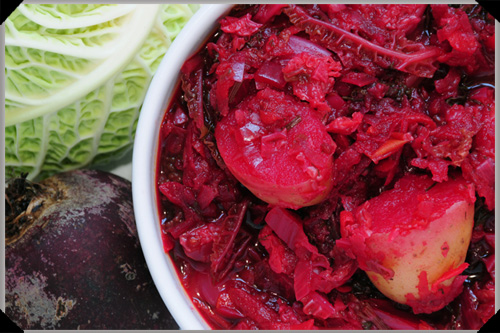 First Russian Salad, now borscht – you might be forgiven for thinking that The Daily Spud had packed up and moved several countries to the East. In fact, with the weather these days, you could be forgiven for thinking that the entire country had migrated somewhere east and north of its usual position. Not actually the case, though. I’m still firmly rooted in Irish soil and the country would still appear to be residing in its accustomed spot on Europe’s western fringes. It’s just that the snow and temperatures hereabouts make me feel like I’m in a Russian winter (perhaps I exaggerate slightly, but still, my extremities do have trouble thawing out these days). 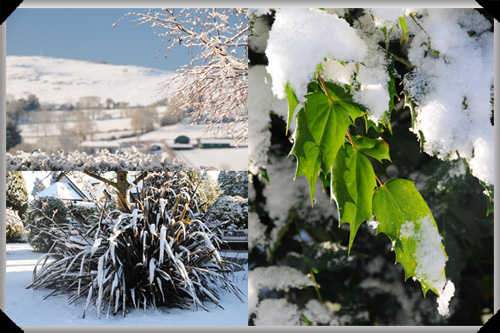 So, borscht, then. Or should I say borsch? Katrina tells me that Russians and Ukrainians call the soup borsch, while Poles call it borscht, though she has no idea why. They can agree, I think, on the fact that it is a hearty soup involving beetroot and several other winter vegetables.

And while I might not be in Russia now, I came to have a vat of Ukrainian borsch(t) bubbling on my stove as a result of having been to Russia once upon a time. Through lucky happenstance, I found myself at a cookery lesson in a Moscow school cafeteria, where a charming lady instructed myself and a couple of others in the ways of borscht and traditional Russian salad. I had scribbled copious notes about the borscht at the time, but had never actually returned to the recipe. Until this week, that is. And was I ever glad that I did, for this is truly depths-of-winter fare. I think that I will probably be eating this for the foreseeable future, or at least until I have once again regained my proper internal temperature. 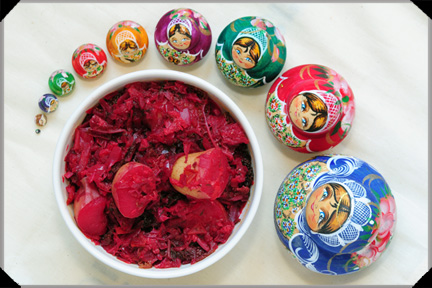 I find beetroot an imposing vegetable, both in terms of flavour and colour, and I tend to exercise care when I use it, so that it doesn’t overpower the rest of what’s on offer. This borscht is a beautiful blend, though. Beetroot yes, but lots of garlic and dill, not to mention spuds, cabbage, carrots, onions and tomatoes – it feels like a post-Christmas detox-in-a-bowl. And you don’t really need anything else to eat with it, except possibly some dark rye bread.

The recipe is more or less the one I was shown in Moscow. The original called for white cabbage but I used savoy cabbage, because that’s what I had and I prefer it anyway. I’ve specified waxy potatoes, because they’ll keep their shape and you’ll end up with beetroot-coloured chunks of potato as part of the mix. You can use floury potatoes instead – they’ll just tend to disintegrate more into the soup. Still good, though.

One thing I would suggest is that you do the bulk of the vegetable prep before you start cooking. There are a lot of vegetables and a lot of chopping and grating involved, and you’ll have things cooking in 2 different pans, so a bit of advance mise-en-place will make this more manageable.

Finally, for another version of this dish, Katrina thoughtfully describes a version adapted from one she learned from her Ukrainian mother here. I might try to incorporate some elements of her version in mine next time ’round.

Given the preponderance of wintery vegetables in this soup, I thought it only right and proper that I submit it to the latest Monthly Mingle, which is all about the wondrous things that can be created using winter fruits and vegetables.