Spud Sunday: From Russia With Spuds

I don’t think I had quite appreciated how big potatoes were in Russia.

And, no, I’m not talking about giant potatoes… 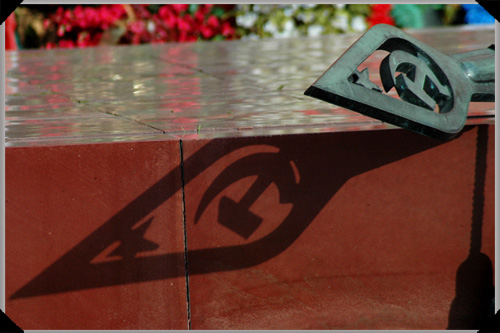 Land of hammer, sickle ...and spuds

…but about the fact that the Russian appetite for all things potato is quite prodigious (yes, potato vodka included). I was enlightened in this regard by Katrina from Around the World in 80 Markets, whom it was my pleasure to meet at Food Blogger Connect last November. A native of Russia, she had lately suggested the idea of a joint potato post. She put it thus: “Ireland and Russia, united by the unique and encompassing passion for the humble potato”. I said bring it on!

First things first. I wanted to know how Russians like to eat their spuds. The short answer was “often”.

Yep, Katrina says they like to eat potatoes three times a day – which makes it sound like I’d be right at home! Mashed potatoes are very popular and one of Katrina’s childhood favourites was meat à la française – thinly sliced potatoes, layered with onions and pork steaks and covered with mayonnaise. Particularly special are new potatoes, lightly boiled with lots of butter and dill, which she remembers looking forward to intensely during the cold, wintery months. The potato dish which is most famous, of course, and which is a feature of meals on special occasions, most especially New Year’s Eve, is Russian Salad. 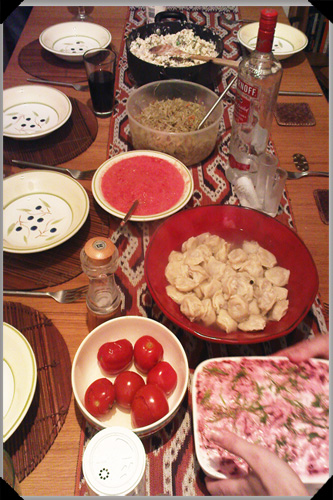 The salad has an interesting history, which Katrina describes over here. Here’s a taster from her post:

[Around the 1860’s….] a French chef called Lucien Olivier (a seriously flirtatious type, according to some) was re-inventing it [the potato] in The Hermitage, one of Moscow’s most celebrated restaurants. The original salad was rather different from the contemporary version and included amongst other ingredients hazel-grouse, veal tongue, caviar, capers and mayonnaise Provençal – a heady sauce of yolks and olive oil that the young Lucien had brought from his home-land.The legend has it that one of his understudies had stolen the recipe for the sauce and started making a version of the salad in another Moscow restaurant, naming the concoction ‘Stolichnyj salad’, or The Capital Salad’ (the name still widely found in all sorts of Russian eateries). Over time, the salad had gone through the inevitable bourgeoisition (such a word?) process and is now using either chicken or ham or even frankfurter type sausage, tinned peas, boiled carrot and eggs, mayo out of the tub and, of course, boiled potatoes.

She goes on to present her own “trendified” version of the salad (without the mayo from the tub) and you can see my take on her version below. 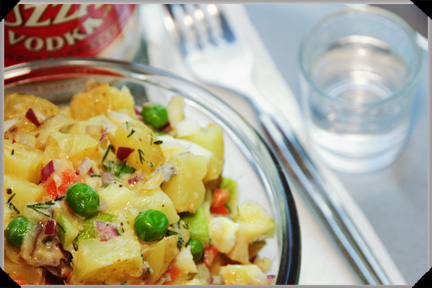 As Katrina notes, you can really put whatever you like into this, as long as there are potatoes, meat and mayonnaise and around twice as much spuds as everything else. She recommends making your own mayonnaise (and I agree), though, nowadays, this may be seen as a little less authentic!

What you’ll find below is slightly adapted from Katrina’s version of the classic Olivier salad. She used chicken, I used fish (and, for a vegetarian version, you can, of course, skip the meat entirely). I also used red onion instead of yellow and couldn’t resist throwing in additional capers and some lemon juice. As I couldn’t lay my hands on salted cucumbers, I used dill pickled cucumbers instead, though Katrina’s preference is for the former and she also uses a little of the cucumber brine in the salad. I’ve had Russian salad in Russia with home salted cucumbers and I know how good that is. Next time, I’ll just salt my own.

This may seem long but it can be summarised as follows: cook the bits that need cooking (spuds, carrots, peas, egg, your choice of meat), let everything cool down, chop everything into little dice, mix with mayonnaise and other seasonings. Done.