An apology is in order.

I have been guilty of taking the roastie for granted. A potato classic, known to feature regularly on my plate but yet scarcely mentioned on The Daily Spud… Oh for shame.

Nothing else for it but to make amends with a little Christmas roastie special, for it is fair to say that Christmas dinner in Ireland could not legally be defined as Christmas dinner without a great big pile of roast potatoes. So, with the assistance of the experts that reside on my kitchen bookshelf, may I present herewith my 12 step roastie program. 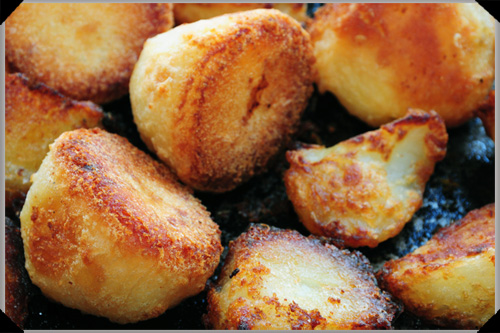 (1) Type of spud: Perhaps I should start by stating the obvious, which is to say that some types of spud are predisposed to roastie greatness and some, well, just aren’t. What you want are those floury types – records, kerr’s pinks, golden wonder – roosters work too – and in the US, russets or yukon golds. Keep new potatoes or waxy varieties for steaming, salad or gratins, that’s what they’re good at.

(2) Priming your spuds: While it is generally advised not to store potatoes in the fridge (because, at low temperatures, the potato starch will start converting to sugars), Shirley Corriher notes in Cookwise [1] that, if you keep spuds in the fridge for a day or two before they meet a hot oven, those newly converted sugars will promote future roastie browning.

(3) Roastie size: Let’s face it, when it comes to roasties, it’s the crispy bits we’re after, so you’ll want to keep the size of each roasted piece fairly small, giving a higher crust to spud ratio (I like Nigel Slater’s description in Tender [2] of roastie size as about 2 bites worth). If your spuds are large to begin with and must be chopped, then all the better – you will end up with more edges, and crispy edges are a good thing.

(4) Preparing in advance, do’s and dont’s: If possible, don’t peel your spuds until just before you need to roast them and, once you’ve peeled them and cut them down to size, do rinse them well to wash off any surface starch. If you need to prepare your spuds in advance, don’t leave the peeled potatoes soaking in water, because your roasties will end up soggy. Darina Allen, in Forgotten Skills of Cooking [3], suggests that, if you do need to prepare your potatoes in advance, that you toss the prepared spuds in your fat of choice, cover and refrigerate.

(5) To precook or not to precook, that is the question: Ultimately, it is a matter of personal preference as to whether you partially cook your potatoes before roasting or not. Most often, I roast from raw because of the extreme lack of effort involved and also because the potatoes tend to absorb less fat that way. However, roasties that have been partially cooked have more flavour and crunch potential: flavour, because cooking in well salted water will help to get some flavour into the interior of the spud and crunch, because the outside of the potato has more cracks and fissures in which to trap fat and become crunchable. Once the potatoes have been precooked enough to soften their outer layers, it’s easy to roughen up the surface and hence promote crunch potential.

(6) Make use of those potato peels: I love Heston Blumenthal’s approach in In Search of Perfection: Reinventing Kitchen Classics [4], where he places the potato peelings (which have relatively more flavour) in muslin and adds them to the water used to precook the spuds. It makes for roasties that actually taste of potato.

(7) Type of fat: Duck fat and goose fat are much favoured, as are beef drippings, though you can, of course, use olive oil – all different flavours, all tasty. And whether you’re roasting raw or parboiled potatoes, make sure that the potatoes are as dry as possible before they hit the oil or fat in the roasting tin, otherwise those crunchy bits might just end up sticking.

(8) Other flavourings: The possibilities are endless. Mix herbs or spices with the fat used to coat the spuds or toss the spuds with some seasoned flour. I like Delia Smith’s suggestion in How to Cook, Book 1 [5] of adding some saffron threads to the olive oil, adding both flavour and colour.

(9) The heat: Hot oven please, and it’s a good idea to preheat the roasting tin and oil or fat as well as the oven itself.

(10) While cooking: There’s no need to turn the the spuds much while they’re cooking, just once or twice will do it.

(11) Don’t keep ’em waiting: Roasties do lose crispness fairly quickly, so try not to wait too long before you tuck in. If you do need to keep them warm for a while, Nigel Slater suggests that it’s best to keep them uncovered in a cooling oven.

(12) Leftovers: Er, what leftovers? Darina Allen does remind us that, in the unlikely event of there being leftover roasties, that they can always form the basis of a roastie salad: chop into small chunks, toss in some vinaigrette and away you go. They may no longer be crisp, but they will still taste good.

I was discussing the topic for today’s installment of Spud Sunday over the phone with MGH when her sister chimed in with one word – polenta. In the past, I have used polenta as a crunchy coating for veggie sausages [6] and roast parsnips, so why not roasties indeed. Thanks for the suggestion, Naomi, as you can see, I ran with it.