It was a simple choice: eat my words or eat the contents of my freezer.

What happened, you see, was that Love Food magazine, published with yesterday’s Irish Independent, had included a little piece from me on tips for Christmas (ah, yes, fame at last! – even if it did miss out on my current top tip, which is to head over here for a shot at a free box of Tayto crisps). 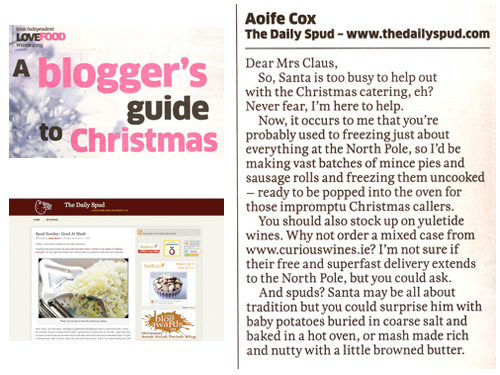 Exciting indeed to see my words in actual newsprint but, having urged everyone in the country to fill their freezers with mince pies and the like, I had a weeny problem on that front myself. My freezer bore one of those looks that said “defrost me now, or else…”.

I had been vaguely attempting to clear the freezer for months now. No sooner had one lot of frozen comestibles been used up, than another magically appeared to take its place. At times it felt like hell might freeze over before the plug got pulled on my own frozen-over fridge.

However, knowing that the deed had to be done before I loaded up with Christmas fare, I bit the bullet and, for about a week, dined on whatever the freezer had to offer. This pea and mint soup, brought to you by a bag of frozen peas, some frozen chickpea stock and frozen ginger, was definitely one of the better things to result.

You should remind me to make this again, sometime when it doesn’t also involve defrosting the freezer.

It is, of course, a variant of a classic soup – why even Mrs Beeton includes a pea and mint soup in her Book of Household Management, dating back to 1861. For stock, I actually used water saved from cooking chickpeas (I often reserve and freeze liquid in which I’ve boiled veg or beans as the basis for future soups and gravies). 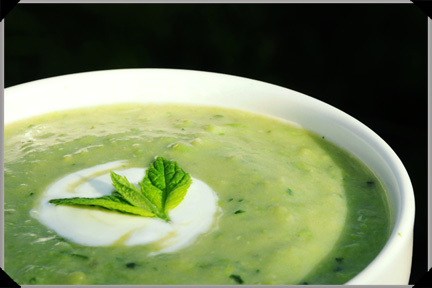