My non-stick pan, it transpires, is really nothing of the sort.

This I discovered today, when I used it to make a colcannon-inspired potato cake, fashioned from julienned potatoes and filled with a mix of cabbage and onion. The cake should have had a really rather appealing pattern of golden potato sticks top and bottom. Instead, having resolutely stuck to the not-so-non-stick pan, the result looked like mush. Very tasty mush, I might add, but mush nonetheless. Hmph. 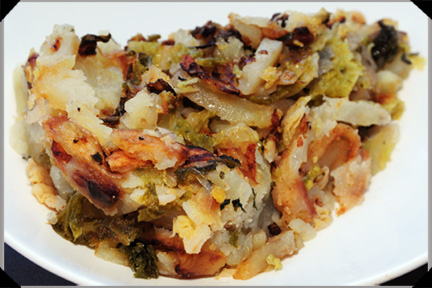 This is based on a recipe for Straw Potato Cake with Braised Leeks from the Dublin Cookery School, where I spent an evening last week learning to properly wield some of those fancy knives that I own.

The original cake is basically a fried sandwich of julienned potatoes with a filling of leeks. Instead of leeks though, I thought colcannon – mash shot through with cabbage and onion – and used that combination instead. As you will have gathered, the use of a non-stick pan is rather critical if you want to end up with a nicely formed cake, but, there again, a bit of stickage is not a complete disaster either.

The recipe uses clarified butter for frying, which has less of a tendency to burn and should also help to minimise the possibility of sticking (though not in my case, clearly). For the low-down on clarified butter, scroll to the end of this post.