The enthusiasm of Gillian Walsh, for example, who blogs at Some Say Cocoa, Some Say Cacao, had lead to her conducting a truffle-making class as part of the festival. This was truffle-making 101, aimed at those whose experience ran to eating, rather than making, chocolate truffles. Perfect for me, in other words, and I was more than happy to discover that truffle-making doesn’t have to be at all complicated. 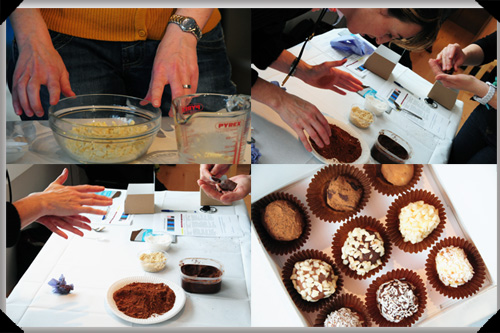 The rest of my festival experience was composed, I would say, of equal parts listening and tasting.

Listening, for example, to Jamie and Beatrice from ChocOneill, who described their pursuit of single origin and single plantation cocoa beans, followed by a tasting of the flavours in their delicate plantation chocolates. It was an experience that would make anyone think twice about reverting to mass-produced faux-chocolate confections. 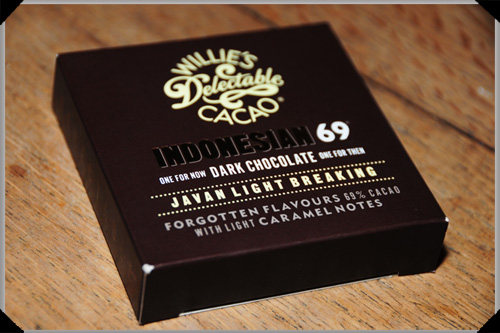 Willie has a new bar and it's all for me

The same can be said of listening to Willie Harcourt-Cooze, who gave a hugely entertaining presentation on his own particular journey from cocoa bean to chocolate bar. A man obsessed by chocolate and with a singular determination to educate the public palate in the matter of cacao, it was fascinating to taste the fermented cocoa beans, cocoa nibs and, finally, the resulting 100% cacao in his Venezuelan Rio Caribe bar. It was a pleasure to later taste a truffle made by Mary Teehan (aka The Truffle Fairy), which was coated and filled using some of Willie’s 100% cacao. 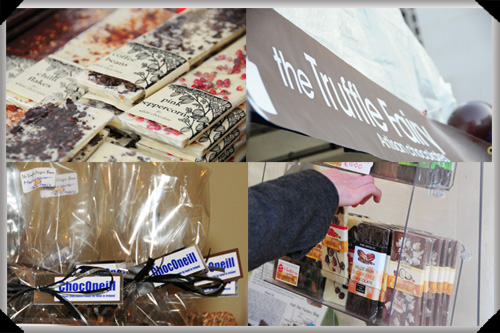 Scenes from the Chocolate Fair

There was, of course, plenty of scope for festival-goers to pursue their own cacao nirvana at Sunday’s Chocolate Fair, with a high quality assortment of Ireland’s artisan chocolatiers in attendance. My first port of call was Karola and Maitiú Ó Conaill, who have been making fine couverture chocolate in Cork for 30 years. An absolute pleasure to talk to, they have seen the Irish, a nation with an established taste for Cadbury’s milk chocolate, develop much more of a liking for fine dark chocolate in recent years – to the point where their 100% cacao bar is actually one of their best sellers. Meanwhile, with their dark cherry and vanilla 70% bar, Patricia from Wilde Irish Chocolates hopes to satisfy not only the demand for dark chocolate, but the appetite for chocolate that is organic and fairly traded.

As for me, even if my aim had only been to accumulate a stash of fine chocolate, then I succeeded in spades, with samples secured from all of the chocolatiers mentioned and more besides – I also count goodies from Lorge Chocolatier, Áines Chocolates and The Chocolate Garden as part of my haul. More than that, though, I know who to chase down in future when I want to get my hands on the good stuff and I guess, by now, that you do too.

These were my favourite of the truffles from Gillian’s truffle-making workshop. There are really only 2 requirements here – one is that you like the chocolate that you’re going to use for the truffles (when I was trying these at home I used some Ó Conaill’s 35% milk chocolate, which is very fine indeed). The other is that you like the taste of Turkish delight, which comes from the addition of rose water. 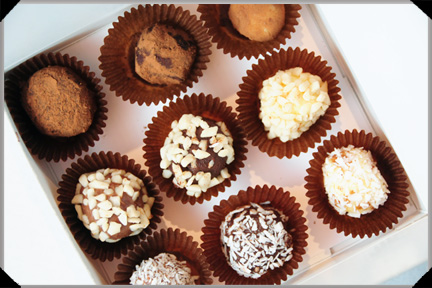 It would be remiss of me not to congratulate the winners of the competition that we ran in conjunction with the Chocolate Festival. Kate O’Connor and Deirdre Ní Dheá won tickets to the Willie Harcourt-Cooze talk, which I hope they enjoyed as much as I did, while Raluca Gherghe and Kate Walsh won copies of what I’m sure will be the equally enjoyable Willie’s Chocolate Factory Cookbook. Well done all.