Of late, I have been working on my mash technique.

Knowing that some people can get quite exercised when it comes to the subject of mashed potatoes, it is only right and proper that I should take my research in this area very seriously. 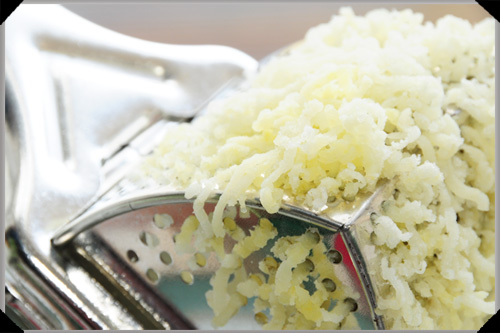 Potato ricer: the tool of choice for discerning mashers

Now I have, over the years, managed to assimilate miscellaneous bits of mash know-how. I know, for example, that for a really smooth mash, I should have a potato ricer on my side. I also know that it’s best to mash those spuds when they’re still warm and that butter will be absorbed better if it gets in ahead of any milk or cream, rather than the other way around. And if I am indeed adding that milk or cream, I know that I’d do well to warm it up first, before it embarks on a hot date with those buttery spuds.

Yes, all of these things I know, yet sometimes I am visited by the awful spectre of gummy mash.

Luckily, Jeffrey Steingarten, in The Man Who Ate Everything, devotes considerable space to what it is that causes mashed potatoes to become something more akin to wallpaper paste than the comfort food of your dreams.

In essence, a gummy, gluey mash results when starch granules, which absorb water during cooking, burst and release their sticky contents. Steingarten found that the best way to avoid gummy spud syndrome was to cook the potatoes in two stages: first in hot water that is well below a simmer, after which they are cooled and cooked again, this time at a simmer, until done.

During stage one, the potatoes absorb water, which swells the starch. After they cool, the starch firms up and loses much of its ability to dissolve in liquid, so the potential for later gumminess is reduced. Further simmering brings the spuds to the point where the internal cell walls start to break down and cells separate easily rather than bursting apart, which is a good point at which to mash. Shirley Corriher in Cookwise agrees with Steingarten’s conclusions and recommends the same 2-stage cooking method.

Thus, having read this 2-stage advice from, not one, but two such credible sources, there was nothing else to do but give it a whirl. I have to say that I found it a somewhat alien experience to cook anything on the stove-top that was not either simmering or bubbling madly, but that was how stage one, with its spuds in hot water, went down. I can’t deny, however, that having passed through both stages, the desired effect was achieved and my resulting mashed potatoes were, in the end, quite glueless. 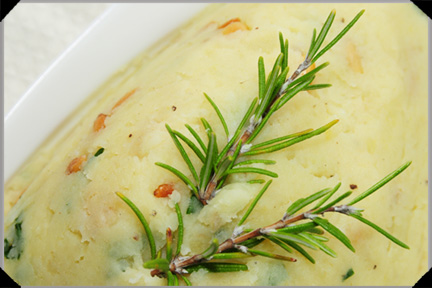 Mashed potato is not just about technique, of course. There are endless variations on the ingredients you can include to make a winning mashed potato formula. For example, in my world, mashed potatoes always include butter. However, I was struck by the notion lately that if I browned my butter first, I would end up with a warm, nutty-tasting mash. That’s pretty much what happened.

This is the path to non-gummy mash as derived from the writings of Jeffrey Steingarten & Shirley Corriher. The 2-stage cooking process is, of course, fussier than just boiling or steaming your spuds but if you are plagued by gluey mash, this is worth a try.