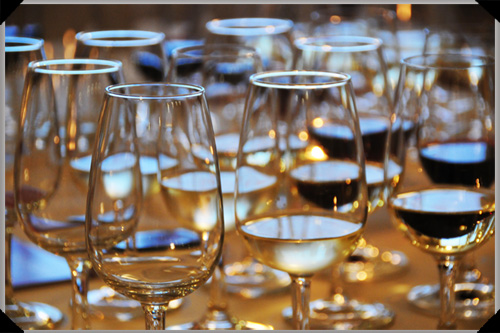 Oh maybe just a taste, then

Methinks I need to do a wine appreciation course.

Or perhaps wine education would be a more accurate term for what I’m after. I reckon that I already have a pretty good sense of appreciation when it comes to wine.

For example, I appreciate it when my mate Rufus tips me off about a tasting of lesser known vine juices from the cooler regions of Australia, organised by Wine Australia’s man on the ground in Ireland, John McDonnell.

And I especially appreciate when I am invited to a small, private tasting of shiraz with Nigel Dolan, chief winemaker with Wyndham Estate, whose Bin 555 is the biggest selling shiraz in Australia and New Zealand. No mean feat for what is the signature grape of Australian winemaking.

What my mind lacks, however, is a firm grasp on the nuances and complexities of wine. I can generally confirm, if questioned, whether a given wine appeals to my palate or not, but often feel at a loss for the words needed to articulate and do justice to what it is that I’m tasting (this problem is not limited to wine, I might add).

I am learning, though. 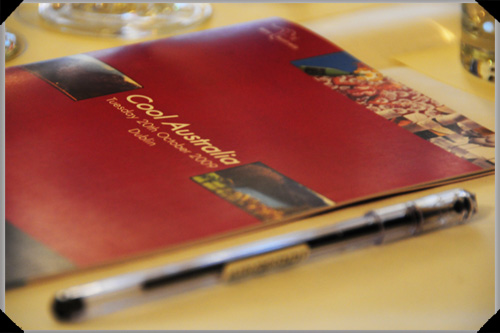 Australia may be home to a red centre, but it boasts cooler climes as well

Last week’s Cool Australia tasting, lead by Will Adkins from the Tamar Ridge winery in Tasmania, was a journey through a vale of whites with only occasional splashes of red. The 14 wines sampled were sandwiched by my two favourites from the evening, a sparkling Jansz Premium NV Cuvée for starters and the Tamar Ridge ‘Kayena Vineyard’ Botrytis Reisling 2007, which was most definitely for dessert. It wasn’t simply a case of learning that I liked those two, however (which I won’t deny is useful information to have) – I also began to appreciate the freshness of character that cooler conditions bring to a wine and, in the process, became at least somewhat more aware of why it is that, when it comes to white wine, my heart, as a rule, beats for sauvignon blanc. 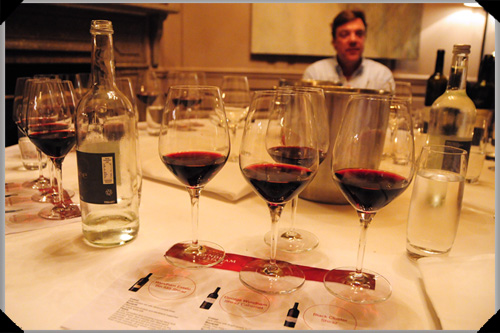 Nigel Dolan and a bevy of Wyndham Estate beauties

As for my utterly privileged few hours in the company of Nigel Dolan, I can only hope that osmosis works as a means of absorbing knowledge and gaining insight. The evening went far beyond a simple sampling of the breadth of shiraz wines made by Wyndham Estate (of which it was the George Wyndham Shiraz Cabernet 2004 that most appealed to my taste). Rather, it was a wide-ranging conversation about Australian winemaking in general and shiraz in particular. It was about emphasising local accent and character in a wine, no matter what the grape. It was about appreciating the ever-changing nature of a wine but, at the same time, not losing sight of the fact that, as Will Adkins had put it, a bottle of wine should be 750mls of fun. Now that is something I can most certainly appreciate.