My Ma was fond of quoting a Limerick which went thusly:

I can’t imagine that the resulting cider was anything to write home about, unless, perhaps, the lady in question was given to eating cider apples, a subject about which I am now somewhat more informed, having attended last weekend’s cider-making festival in Hereford.

That I was at the cider festival at all was merely lucky happenstance. I was in Hereford for my niece’s wedding and noticed a sign containing the words cider and festival in the same sentence. It was bound to catch my attention. I would like to thank my niece for (a) taking up residence in the heart of England’s cider country (b) arranging for her wedding to coincide with the cider-making festival and (c) suggesting accommodation that, it turns out, was right across the road from the cider museum. That is what I call a result.

So, whilst not otherwise engaged in wedding activities (some of which, er, included drinking local cider), I was able to duck into the festival and museum to see what it was all about. 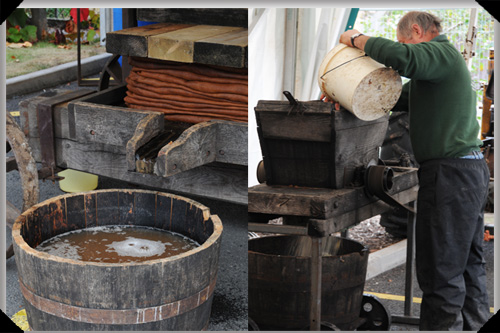 Turns out that the festival was about many things, from traditional cider pressing to coopering, that ancient art of crafting water-tight wooden casks. It’s a trade which has been in steady decline over many years, as breweries opt to use metal casks instead. Not only is Alastair Simms (pictured below) the last master cooper working in Britain, but he says that, at present, there is no funding available from the British government to support a coopering apprenticeship. It seems a great shame to see skills such as his die out. 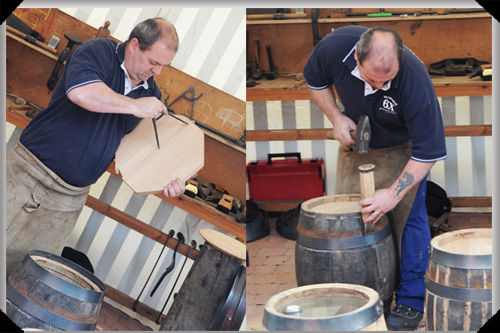 The festival was also about cider apples. A great many of them in fact, presented for display by Gillian Bulmer. Gillian’s grandfather was one of the founders of HP Bulmer, which grew into what is now the world’s largest cider-maker. 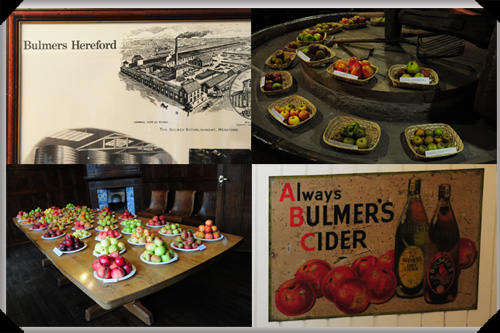 Scenes from the cider museum

I learned several things about cider apples from Gillian: that they should have plenty of sugar, which helps the yeast to ferment the cider; that they should not have too much acidity, though some may be needed; and that they need plenty of tannin, which helps to give the cider its body. This last surprised me – merely, I think, because tannins are something that I associate, not with apples, but with red wine and black tea. Several pieces of cider apple later, however, my mouth was filled with that characteristic dryness and I was left in no doubt that a tannin has been to call. Luckily, my cider apple consumption did not have any other ill-effects. Had that not been the case, I might have provided some new rhyming material for my Ma, immortalised, not as a Spud, but as a late lamented cider insider.

Bulmers? Magners? Would the real cider please stand up.

Confusingly, what is sold in Ireland as Bulmers cider does not emanate from the HP Bulmer company of Hereford. Bulmers Original Irish Cider is made in Clonmel by a company founded by William Magner around 1935. In 1937, Magner entered into a joint venture with HP Bulmer but, though the partnership was subsequently dissolved, the company retained the right to the Bulmers brand in the Republic of Ireland. What we in Ireland know as Bulmers is branded Magners for export. What those in the UK know as Bulmers is something else entirely.