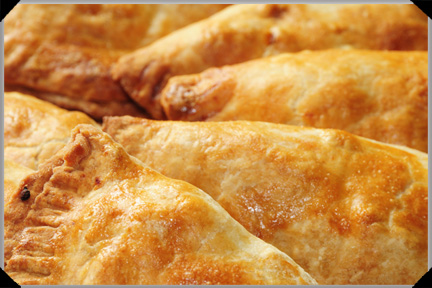 Speaking of things that are big in Chile, according to this New York Times article [1], Chileans are truly passionate about empanadas [2] – little pastry turnovers with fillings which can be meaty, fishy, veggie or cheesy. I couldn’t resist giving a potato-filled version a whirl.

For the dough, I used as my guide a recipe for empanada dough [3] that I found on Epicurious [4]. Though I understand that lard would probably be more traditional, this dough, which uses butter, worked a treat. I would definitely consider making a big batch of this and then freezing individual empanada-sized portions.

For the potato filling, I can’t claim it’s entirely Chilean in origin. The tomato base into which the potatoes went was inspired by an Indian tomato sauce by Madhur Jaffrey. I happened to use small, waxy potatoes for this, which meant that the little cubes of potato retained their shape, whereas floury spuds would tend to break apart a bit more. Either works.

The Put It All Together Steps: