Let There Be Chocolate And Giveaways

Picture the scene. Willy Wonka leads you into the heart of his fabled chocolate factory, his instructions as follows:

Hold your breath. Make a wish. Count to three.

You’d probably wish for a lot of chocolate, right? At least that’s what I’d wish for under the circumstances. In any case, it turns out that we’re both in luck because there will be lots of chocolate on the streets of Dublin when the Temple Bar Chocolate Festival hits town on Friday October 30th, for what is shaping up to be three days of serious cocoa action.

The detailed programme has just been published and I am already loosening a few notches on my belt in anticipation: truffle making, chocolate tasting, chocolate stout tasting, a screening of the original Willy Wonka & The Chocolate Factory and a Chocolate Fair in Meeting House Square on the Sunday, with more chocolate than you could hope to shake a stick at. Some events are free but do require advance booking – the folks in the Temple Bar Cultural Information Centre [ph. 01 888 3610] can help you out with that. There’s no need to book for Sunday’s Chocolate Fair, though, it’s free and open to all comers.

Better still, the Temple Bar Cultural Trust have kindly offered Spud readers two pairs of tickets to attend a talk by Willie Harcourt-Cooze, which takes place at 2.30pm on Saturday October 31st in the Button Factory in Temple Bar. Willie should be familiar to folks on this side of the pond following the Channel 4 series, Willie’s Wonky Chocolate Factory, which followed his exploits in setting up a chocolate factory in Devon. 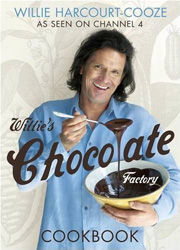 By now I realise that legions of you are cursing at your screens because you have no hope of attending the festival or the talk, so, in an attempt to make it up to you, there will also be two copies of Willie’s Chocolate Factory Cookbook up for grabs, which, if you should win, will be sent to you, wherever you’re at.

So let me know in the comments if you want your name in the hat for a copy of the book, a pair of tickets for the talk, or both. I’ll leave this open until midnight GMT on October 26th and let the winners know thereafter. In the meantime, you’d best get your festival training underway with some chocolate+chocolate+chocolate biscuit cake. It’s the stuff that chocolate dreams are made of. 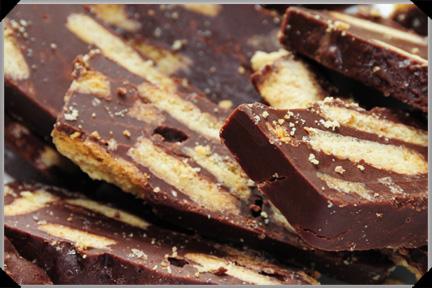 First I should explain the theory behind chocolate biscuit cake (for those untutored in these matters): melt lots of chocolate, add in some broken digestive biscuits, leave to set. Couldn’t be simpler, really. If you’re in the US and don’t know what a digestive biscuit is, think graham cracker.

This recipe below is the Roly’s Bistro version, taken from my recently acquired Zest! cookbook. The original recipe topped the chocolate/biscuit mixture off with some chocolate icing. I skipped that part, however, figuring that I already had quite enough chocolate to be going on with. Instead, I sprinkled some nice salt on top of the biscuit cake and that was a fine addition.

As you can see, this contains a humungous amount of chocolate. The original recipe stated that this amount would make dessert for 10-12 people. I would say that you could feed many more than that, as it is unashamedly rich. You could easily make half this amount and still keep yourself in chocolate biscuit cake for days. The other thing to say, of course, is that because this is mostly just chocolate, the quality of the chocolate really matters. I used a mixture of Lindt and Green & Black’s chocolate bars for this.