To be perfectly honest, I wasn’t quite ready for what happened yesterday while on my latest Spud outing. I’m still trying to take it in.

The day started innocently enough. I had laughed in the face of the rotten, pouring-down weather and made my way to the Mansion House for the launch of Zest!, a cookbook showcasing recipes from 62 of Ireland’s leading chefs and restaurants, and which was conceived with the aim of raising awareness and funds for the Irish Hospice Foundation. 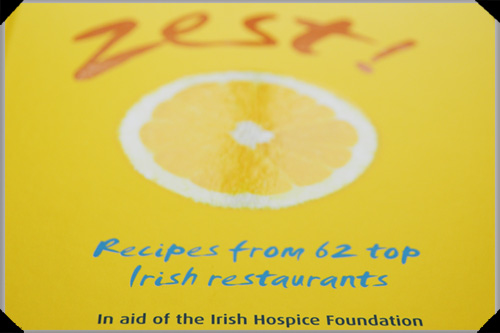 I arrived, looking not unlike a drowned rat, signed in and was handed a copy of the book. (Yes, lucky me, I qualify for press copies now). I admired the lovely looking tome, though I worried slightly that I might ruin it, what with my wet paws and wet everything else. I dripped into the reception room and tried not to create too much of a puddle. Then, a little yay! when I saw the Coffee Angel stand, followed by much boohooing when I realised that they were not quite ready to start dispensing caffeine.

It was then that Tom, the very friendly PR guy, zoomed over to tell me that the chefs in attendance would be done with their photo-call soon and if I wanted to interview any of them, just let him know.

I had known that some of the chef-authors would be in attendance, but I hadn’t necessarily expected to speak to them, much less conduct something called an interview. Curses. I was completely unprepared. 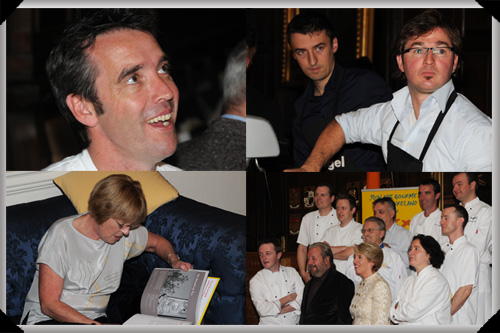 Moments later, Tom was back with an update.

“The lady from the Herald is just with Kevin Dundon, but I can get him for you when she’s done.” Or words to that effect.

I was struck dumb at the thought of conversing with one of Ireland’s best known chefs. I flicked through the book, desperately hoping that Kevin had included a spud recipe, but, alack and alas, he had not. There went that interview question.

I considered making a rapid exit-stage-left, but ran into the charming Orla Broderick before I had a chance to enact my escape plan. Orla was the recipe editor for the book and I got a great sense of the effort that went into the project and the attention to detail that prevailed. I had almost forgotten about the whole interview-Kevin-Dundon thing. Tom, however, had not.

Talk about feeling like a rabbit caught in the headlights. I managed to comment on how nice the book looked, while Kevin obligingly gave me his spiel on the recipes he’d included and how impressed he was with the project as a whole. I ummed and ahhed a bit and started simultaneously wishing that I had (a) watched Kevin when he was on the telly and that (b) I had eaten at his Dunbrody House restaurant, so that we would have something else to talk about. Unfortunately, neither was the case.

The interview came to a merciful end and I sheepishly asked if he might sign my copy of the book, which he graciously did. I scuttled away and finally relaxed into the arms of a waiting latte. I sipped, feeling relief mainly, followed by the urge to laugh out loud when I realised what the lesson for the day had been: that in the world of PR, there really is no such thing as a free launch. 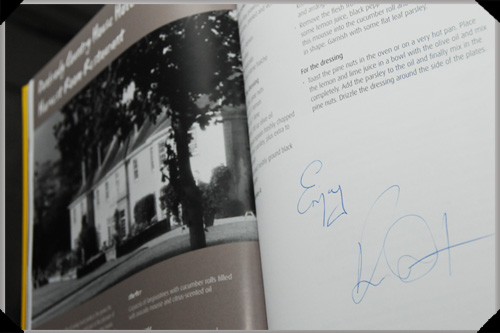 ...as signed by the chef