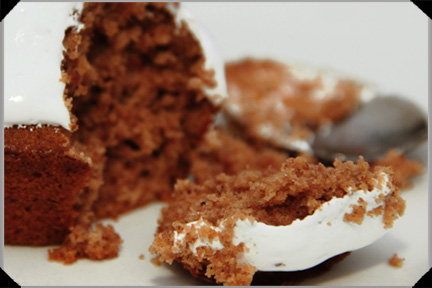 This momentous occasion naturally required that I should make some little cakey somethings. With potato, of course.

It’s not as strange as it sounds. As with bread [1], using a little bit of cooked potato will add moistness. In fact, the “Colour Book Of Baking” that I was given for my 12th birthday, and which I have still, had a recipe for a chocolate potato cake. I tinkered a bit with that recipe and made these simple cocoa buns (that would be Irish for cupcakes, in case anybody was wondering).

Now, I’m not often given to icing my baked goods, but, in this case, I even went as far as to try out a recipe I had found for a buttercream icing with mashed potato. Let’s just say that I made it and I abandoned it, figuring that there are some places that a potato does not need to go. For everything else, there’s The Daily Spud.