“You know, you sound like you’re becoming a bit of a lush” says N. to me, “…what with the vodka cocktails and all”. By “and all” he probably meant my flirtations with cognac, porter and the occasional curious wine.

Oh dear. Was I really starting to sound like a pickled spud?

I pondered this as I sat in Mulligan’s during last Thursday’s Arthur’s Day festivities, sipping, in point of fact, a pint of water, albeit served in a Guinness glass. I admit that the glass would have been filled with Guinness were it not for the fact that I was stuffed to the gills, having had the pleasure, earlier that evening, of meeting Oyster Food & Culture and her mum for dinner (and, er, wine) in 101 Talbot. 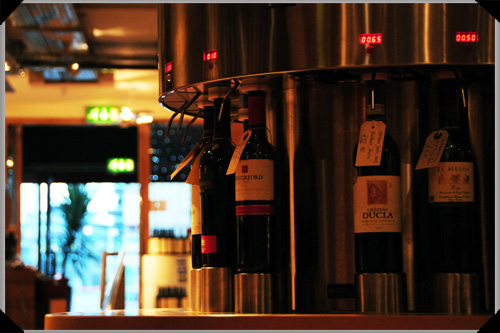 Part of the Enomatic sampling system

Seeing as my reputation is shot anyway, I may as well tell you that I was impressed with Enowine’s self-service Enomatic sampling system, with a goodly range of bottles set up to dispense 30ml samples. The system is such that the wine is dispensed without allowing oxygen back into the bottle, so each drop should taste as it would were the bottle freshly opened. You just load your Enomatic card with credit and select your tipples at will. For the record, my favourite of the night was the lovely Clonakilla shiraz. 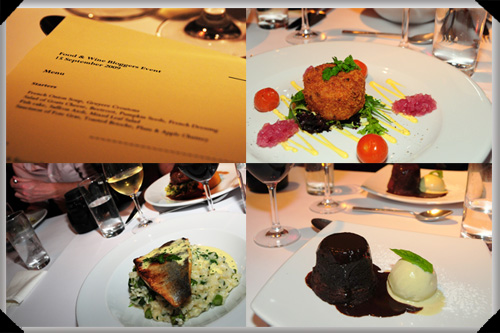 Not just wine, but food

Lest you think I am beyond redemption, I hasten to add that the evening wasn’t just about wine. La Cuvee treated us to food too, for which I am always thankful. Fishcake, sea-bream with asparagus risotto and chocolate pudding with pistachio ice cream. I rolled home afterward, burping (in a good way) as I went. I wish them luck with their restaurant relaunch.

Speaking of restaurants, I’m told that Dine in Dublin is back, where, from October 12th to 18th, a range of city centre restaurants will be offering 3 course dinner menus for either €25 or €30 per head. (And no, the price does not include any vino. I checked.)

If posh nosh in general is your thing, then Whoseview, a newly established local review site, tell me that users who accumulate 2000 points by means of their reviewing prowess can claim a free 1 year G Club membership. That, in turn, allows them to claim healthy discounts in a range of fine dining establishments (not to mention an excuse to write even more reviews).

After all that, I find I’m getting a bit thirsty. Just as well I’ve signed up for the Curious Wines Dublin tasting on Nov. 6th then, isn’t it?