Well, what would you do if you were invited to a Finlandia vodka cocktail masterclass? Why, you’d go, wouldn’t you? Yep, thought as much. No need to ask twice. 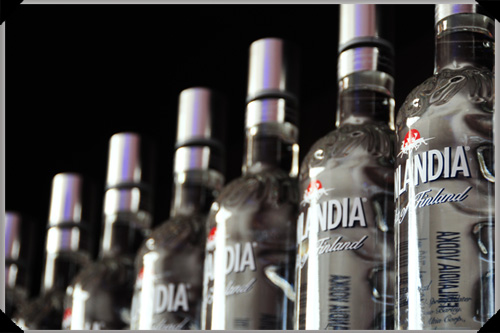 That's a lot of bottles to get through, best get started

So there I was, with a few lucky others, being enlightened in the ways of vodka by Mike and Kevin from The Soul Shakers, London-based bar consultants and cocktail meisters. They were in town as part of the Irish launch of both the 2009 Finlandia Vodka Cup, an international cocktail-making showdown, and the Finlandia Finnishing School, which aims to instruct interested barkeeps in the mysteries of mixology.

And, whereas before the masterclass, my take on vodka might have been summarised as “Take water. Take some starchy plant matter. Mash ’em up, ferment ’em, distill the vapours. Drink. The end.“, now, I know that’s not quite all there is to it.

I know that the purity and taste of the water matters.

I know that the source of the starch matters. So, despite the reputation that potato-based vodkas have had as being a poor man’s drink, it transpires that it’s relatively more expensive to produce the clear liquor from spuds than from grain. Their lower starch content relative to the likes of barley, wheat and rye means that more effort is needed to remove that which is potato and leave that which becomes vodka.

I know that the distillation matters. Most vodkas use a sophisticated column distillation process, though you will always end up with a little something other than pure ethanol and water, depending on which starchy plant you started out with.

In summary, I now know that vodkas do taste of something after all.

Mike and Kevin lead us through a blind tasting and instructed us in what they see as the 3 broad styles of vodka. There are those with a rounder, more unctuous taste, like Absolut, or with a refreshing character and crisp, peppery bite like Finlandia, or those that are slightly sweeter, like Stolichnaya and other Russian vodkas, where a small amount of sugar softens the peppery hit and is just the thing for straight vodka shots (and, if you’re in Russia, lots of ’em). For the record, I liked the Absolut best of the pure vodkas, though I think I could happily savour the wonderful aroma of Finlandia’s vodka grapefruit fusion with maybe just a bit of ice and perhaps some tonic. 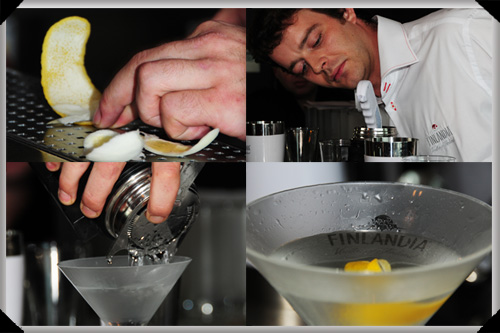 And finally, having been suitably educated as to the raw alcoholic material involved, we were inducted into the school of vodka martinis and grapefruit juleps. Suddenly I felt that my cocktail-making career had taken a giant leap forward.

This drink is really a very simple combination of spirits, with the classic ratio being 10:1 vodka to vermouth, but we learned that the devil, of course, is in the details.

Clearly the vodka you use will make a big difference. On the vermouth front, we learned that it is better to use small bottles of the stuff, as its quality will deteriorate over time. We also learned the importance of temperature – the drink needs to be served cold, but not so cold that it will cause your lips to stick to the glass. And, for the aspiring bartenders among us, we learned the importance of having everything in place so that you can knock out vodka martinis by the dozen.

This was simply delightful. I’d like to have Mike make these for me all the time. 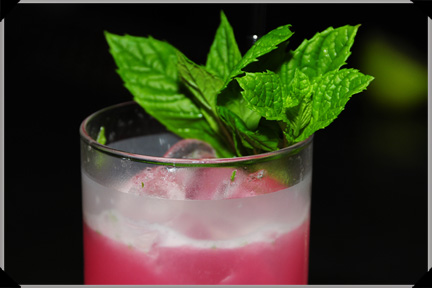