A little while back, the folks from An Bord Bia’s Best In Season website asked if I would contribute a piece describing my favourite spud. As you can imagine, I had a thing or two to say on the subject, so I was more than happy to oblige. I’ve included a copy of the piece below for your reading pleasure. Not only that, but, if you’re up for even more in the way of favouritism, you can now become a fan of The Daily Spud over on Facebook or even submit some food blog award nominations over on Foodbuzz. When you’re done with that, come back here and I will present, without any further ado, my very own favourite spud. 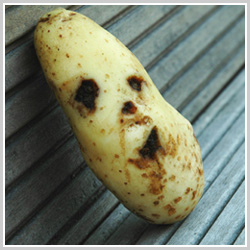 He’s not a looker, bless him, but he’s one of my own. My very own Mr. Potato Head.

I found him in the garden late last year, long after the rest of his mates had been harvested. Finding a spud at that time of year was unexpected. Finding one with that face was priceless. He very quickly became a mascot for The Daily Spud and he really is my actual favourite spud. (And, yes, the fact that I can even identify an individual spud as favourite may tell you more about me than you really cared to know!)

As it happens, I not only have a soft spot for that spud in particular, but, as varieties go, the Sharpe’s Express family from which Mr. Potato Head hails, is probably my favourite class of spud. It’s a variety which produces long, oval-shaped earlies that are both tasty and mighty floury, and I am nothing if not a testament to my Irish upbringing in how I favour a floury spud over a waxy one. It’s not that waxy spuds, the likes of Charlottes, do not have their place. If you’re making a salad or a gratin, then those are the ones you want, but a floury specimen, baked or mashed or just steamed and heaped with butter, well now, that is hard to beat in my book. The fact that the French, and most continental Europeans for that matter, would scoff at our liking for floury spuds matters not a whit. In this jurisdiction, the flourier, the better and Sharpe’s Express get my vote on that basis, beating the not-so-floury but equally tasty Duke of York into a close-run second place.

In the matter of favourite varieties, though, it would really be more accurate to say that the ones I have mentioned constitute my favourites so far. The number of varieties that I have actually dined on is a mere a fraction of the thousands that exist and, while I do not actually plan on trying every potato known to man, there are certainly many more varieties that I would like to meet and eat. The number of varieties grown commercially here in Ireland, however, is relatively small and, assuming that you can get hold of suitable seed potatoes, the only way to sample most varieties is to grow them yourself. I’ve been doing just that in my own small way for a few years now, managing to grow a few early varieties, as well as the occasional funny face.

For the greater part of the year though, I default to digging through the spuds on offer in the local shop and join many others in piling my plate with Roosters (that’s the potato, not the poultry). They do make for a great all-rounder spud and I sometimes forget to go hunting for anything else. If I remember to change things up, I’ll vary the potato diet a little with some Maris Piper for roasties, or Kerr’s Pink, for a taste of something flourier. If I want anything other than those, though, chances are that I’ll have to go digging elsewhere and my thoughts will turn to seed suppliers and what might be on the potato-growing menu for next year.