There is nothing like a deadline to focus the mind.

I was reminded of this fact lately as the closing date for An Bord Bia’s new season potato recipe competition approached. The competition had been announced on the newly launched best in season website over the summer and, with a potato-based reputation to uphold, I was clearly going to have to enter. For weeks I reminded myself that I should do just that. But what new and amazing spudly morsel should I make? I pondered the possibilities.

Should it have an unexpected ingredient, like that potato salad with ground walnuts, say?

Or, given our nation’s fondness for having several kinds of potato with dinner, should it incorporate spuds cooked in more than one way?

Or should it be something classic but with a Daily Spud twist?

The more I thought about it, the less decisive I became. The deadline loomed. Oh the pressure. I even thought about, well, not actually entering…

And then, as I was packing for my Ballymaloe adventure, and with the deadline less than 24 hours away, something emerged from a head that was filled with a mish-mash of Spanish tortilla, tayto crisps and grated potato pie toppings. A hasty trial run, with an anxious wait for the chief taster to pronounce yay or nay, followed by a return to the kitchen, the emergence of a new-and-improved version and a by-George-I-think-she’s-got-it moment. 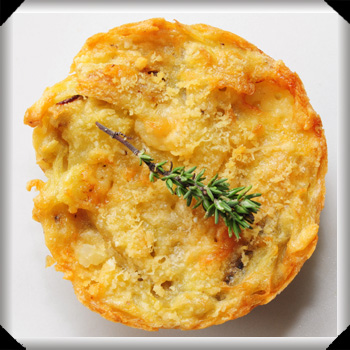 What I had produced was really just a classic cheese-potato-onion combination in a mini-pie form, but I knew that I had found something that was both endlessly variable and that I would make again and again. So pleased was I, in fact, that the entering of the competition became entirely secondary. I set off for Ballymaloe with a spring in my step and a head filled with daydreams of mini potato pies to come.

Update, 2nd Nov ’09: So, this morning the postman arrived with the reward for that harried bout of pie-making back in September: a big, fat restaurant voucher, having made the grade as a runner-up in the competition. Worth it in the end, then, even if I was beaten for top spot by a potato caesar salad…

You can see all of the winning recipes here. 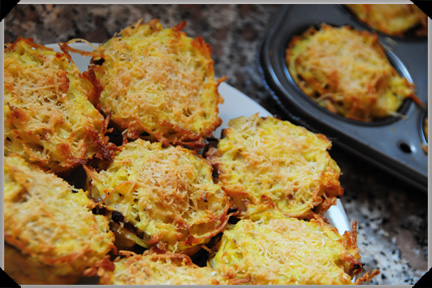