It can hardly have escaped anyone’s notice that eating locally is all the rage these days. Yes indeed, reducing your food miles and growing your own are where it’s at. People who previously didn’t know one end of a spade from the other are suddenly all about raised beds and double digging (for which purpose one sincerely hopes that they are, by now, using the right end of the spade).

Bully for them I say and, yes, bully for me, out there with my wellies on, digging up spuds with the best of them.

While I might have a spade or a garden-fresh spud in one hand, my other hand is reaching for decidedly non-local foodstuffs, which happen to go very nicely with those straight-from-the-garden veg. Things which, I might add, I feel it is my right to have available to me in the kitchen. Basic things, like lemons, say, or good olive oil. Things not of this Irish earth. I’ve been wondering lately whether I could venture down the ultra-local eating path and really give such things up?

I think the short answer is no.

The slightly more considered answer is that it’s not a question of all or nothing. How those items of food get to me is important too.

Take last weekend, for example. While visiting friends in Raheny, I had a wander around the Saturday market in St. Anne’s Park, where I met Tony Hartley and sampled his wonderful Spanish olives and olive oil. Tony deals directly with a single, small-scale producer in Spain and travels there every four months or so to fill his van with olive oil and olives. Back at home, he supplies olive oil to some Italian pizzerias (shhhh, don’t tell them it’s Spanish) and makes classic pesto sauces and marinated olives to sell at the market.

Of course I bought some of his wares. The oil was lovely stuff and the olives (especially those marinated in oil with lemon and cracked pepper) were the nicest I’ve had in an age. And I thought to myself that if I’m going to continue to buy those foreign foodstuffs, I’ll try to buy from someone like Tony. Not only is it reassuring to deal with someone who really personally cares about the quality of what he’s selling, but it also means that I’m only one step removed from the guy in Spain who’s been busy pressing that oil. 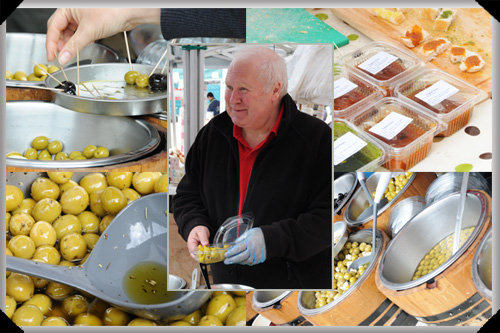 One man and his olives

What’s more, once they get to my kitchen, the olives and oil will not be consigned to a foreign food ghetto but will integrate very nicely with the locals. Like in this gratin, where olives, olive oil and one of those outsider lemons cosy up to spuds, courgette, red onion and rosemary that have travelled from my back garden to the kitchen and no further. It’s a mostly-local approach I think I can live with.

This was inspired by a recipe for a Provençal gratin taken from the wonderful Green’s Cookbook by Deborah Madison and Edward Espe Brown. Instead of tomatoes and thyme, I’ve used courgette and rosemary to accompany the spuds, along with plenty of Hartley’s olives and olive oil. 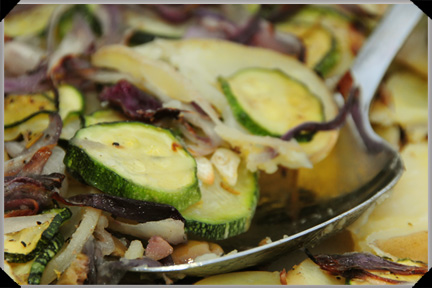