A rather embarrassingly long time ago, Jenn from Bread plus Butter, who puts us all to shame with her prodigious blogging output, was kind enough to say that she thought that this here spudlog was awesome. Wow. That’s a big word for a little blog. I was flattered, naturally, though I couldn’t help but be reminded of what the ever-excellent Eddie Izzard had to say on the subject:

So, yes, it’s a big word indeed, especially when you consider that the spud is traditionally far more comfortable with adjectives like humble. Still, the potato is a vegetable to be reckoned with and, in honour of Jenn’s gesture, here are a few bits and pieces of spud-lore for you. Not necessarily awesome things, but interesting all the same.

(1) When first introduced to Europe, there was a widespread belief that potatoes caused leprosy, the nobbly shape of the early tubers being likened to a leper’s deformed hands and feet.

(2) One of the factors that influenced the eventual acceptance of the spud during the 17th and 18th centuries was the fondness which European countries had for going to war. While cereal crops would be ravaged by invading forces, an army could tramp across, or even camp, on a field of potatoes and the farmer would still be able to harvest the crop. The rise of the potato was thus the silver that lined Europe’s inability to live in peace and harmony.

(3) The War of the Bavarian Succession (1778-9), where Prussian and Austrian armies confronted each other over the right to lay claim to Bavarian territory, is also known as the Kartoffelkrieg or Potato War. As John Reader describes it in A History of the Propitious Esculent:

The opposing forces could do no more than threaten each other, while steadily munching their way through the region’s bountiful potato crop. At the onset of winter both armies … retreated – not victorious, but undefeated and well-fed.

(4) Ireland was one of the first countries in Europe to embrace the wholesale cultivation of the potato. Estimates for the average consumption of potatoes by an adult Irishman around the late eighteenth and early nineteenth centuries range from 10lb to 14lbs of potatoes a day, with one bishop of the time proclaiming that a labouring man needed 21lbs of the stuff every 24 hours. Nowadays potato consumption in Ireland, while still one of the highest in the world, is a more modest 300lbs per person per year.

(5) During the Great Potato Boom (and Bust) of 1903 and 1904, a frenzy developed over the acquisition of seeds for a variety called Eldorado, with single seed tubers being sold for as much as £150 and harvests being sold at the rate of £4,000 per ton, before said seeds were ever planted. The promise of Eldorado turned out to be as elusive as its namesake, however, and fortunes were lost as the trade in seed potatoes slumped. Remind you of anything?

(6) Spuds are known for their tubers, but they can produce fruit too, as some of mine did this year. 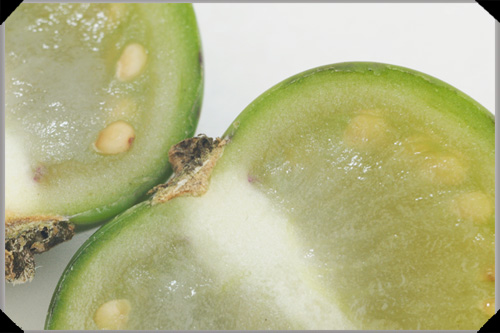 The fruit looks rather like a green cherry tomato, which is not too surprising, as potatoes and tomatoes both hail from the Solanaceae family. Unlike your average cherry tomato, the potato fruit is poisonous, so I do not recommend that you feed this to anyone you like. If potato breeding is your thing, though, you can always cultivate the seeds from your potato fruit and grow your own entirely new variety of spud. Perhaps even another Eldorado, who knows.

(7) Even if you’re not into potato breeding yourself, you will be relieved to know that there are samples of thousands of potato seeds held in the Svalbard Global Seed Vault in Spitsbergen in Norway. The Seed Vault, built into a mountain in permafrost conditions, holds duplicate samples of seeds from around the world and is intended to provide a safety net against accidental losses from traditional genebanks. Thousands of varieties of potato and sweet potato have been deposited there by the International Potato Centre in Peru, plus some 32 varieties from Ireland’s own national collection. Our spuds should be safe for a long time to come and that is good to know.