Sometimes I think that cloning is the only way forward.

I’d go all out and order a job lot of 12 clones of myself, which might be just enough to go around. I would place one of those clones exclusively on blog-reading duty, so that I could properly keep up with all of the other blogs that I (attempt to) read. What bliss that would be.

Now before I go any further, I know that the astute among you will point out that your average spud already develops by cloning, in which case I want to know where the other 11 daily spuds have got to. A little phone call every now and then wouldn’t hurt, would it? 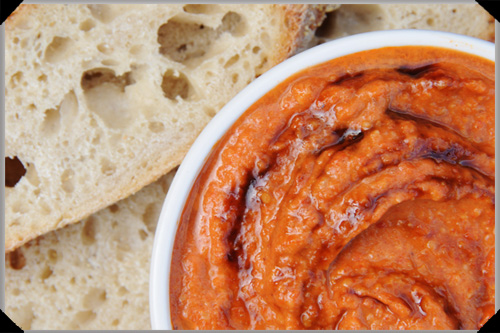 Drop everything and take a dip

Muhammara is a middle eastern dip involving roasted red peppers. I can’t put my finger on quite what it was that provoked such an immediate reaction, leading me to get dressed properly and then leave the building in search of red peppers. Perhaps it was a minor rebellion against the vegetables in the garden – I mean, I love ya lads but I also need a little variety in my diet.

So it was that peppers were acquired and roasted, a taster batch of the dip made and eaten almost as quickly. I had been right to drop everything. I had a new favourite thing to make.

This is ever so slightly adapted from The Duo Dishes, who, in turn, adapted it from Ellie Krieger. Recipes are like that.

A word about pomegranate molasses, which is basically concentrated pomegranate juice. It’s syrupy and tangy and makes a lovely addition to this dip (in fact, you might like to add more than specified) but don’t let the fact that you don’t have any put you off. You could try adding some pomegranate juice instead or try either tamarind paste or amchoor (dried mango powder) which seem to me to have a similar tang. Or you can just leave it out. It’ll still be tasty.

As for the roasted red peppers, you can, of course, buy a jar of same and be done with it. On the other hand, you can go all out and roast your own (see below) which will be even nicer.

On the garlic front, I tend to steer clear of using a lot of raw garlic, so I used less than the Duo (and also tried substituting roasted garlic, which is a lot mellower). Feel free to increase the garlic content if that’s your thing.

There is endless instruction to be had on the internet about how to roast peppers and you’ll find a number of different schools of thought. Some tell you to hold the peppers directly over an open flame (on your gas hob or other flame throwing device), charring the pepper very well on all sides. Some say to char the peppers under your grill element / broiler. Others just roast them in the oven and still others use variations involving a combination of the above. Now, I haven’t spent ages trying out all the different methods but let me just say that the oven method works for me. Not least because I do not have a gas hob, so access to an open flame presents certain logistical difficulties. It’s also easier to use the oven if you’ve got lots of peppers to roast.