It is one of the hazards of being a food blogger that people will call upon you to address weighty matters during pub-time conversations, such as:

When is a berry not a berry?

The answer, of course, is “More often than you might think”, and I would love to be able to say that, when asked, I rattled off the details of this answer to the amazement of all present. Instead, I could only dredge up a dim memory from school biology that there was, indeed, a bit more to the definition of berry than small edible fruit, but I’m afraid no amount of gin & tonic could help me get further than that. Rather, it took a quick chat with my friend the internet before my memory was, er, suitably refreshed.

The fact of the matter is that most of the things that we refer to as berries – strawberries, raspberries, blackberries, blueberries, cranberries – are not berries in the botanical sense, whereas some distinctly unberrylike fruits, technically, are (and, yes, banana, I’m looking at you). The crux of the matter is that, botanically speaking, a berry is a simple fruit produced from a single plant ovary. Once other parts of the flower or plant start getting involved in the fruit, you are dealing with a berry no more.

So there you go. I apologise if I have shattered all of your berry-based illusions. You can take some comfort from the fact that gooseberries, at least, are fully paid-up members of the berry clan. Plus it’s doubtful that the plant police are going to swoop down on anyone for persisting with the idea that a blueberry is, y’know, a berry in the commonly understood sense of the word. If they were, I’d have to figure out how to properly refer to both the blueberries I got from my Ma’s local supplier the other day and to the sauce that resulted. Somehow, “the fruit formerly known as blueberry (and sauce thereof)” just doesn’t quite cut it. 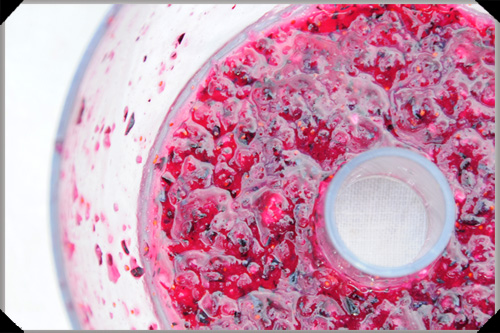 Have blueberries, will make sauce

It is safe to assume at least three things if I find myself with blueberries in the house: (1) they will not last long (2) they will mostly get eaten raw, no further preparation required and (3) there will be no time given over to debating the technicalities of their pseudo-berry status.

If I do get as far as cooking with blueberries, they’re likely to be simply stewed with some lemon juice or maybe added to some cornmeal pancakes. The other day, however, I took a notion that I would use them to make a savoury sauce. I was also feeling particularly lazy, so the sauce consisted of nothing more than a few raw ingredients whizzed up in the food processor. After a few tweaks, I really rather liked the results, not least because it was so simple. This is a tangy little sauce which, so far, I’ve liked best served with some baked white fish (I had it with hake and some basmati rice) and also with grilled camembert. Not bad with corn chips either. You could try it with other things like pork perhaps, or just whiz up a batch, taste it and see what else you think might fit.