Mashed potatoes! The beatings, the maulings, and the ultimate degradation to a which an honest Irish potato must submit tomorrow turn me sad-eyed from my plate.

Claire Warner Churchill, From “An Oregon Protest Against Mashed Potatoes”

Now there’s a woman who doesn’t mince her words. The quote above is just a small extract from a 5 page complaint about potatoes being “fluffed, whipped, paddled, pounded, beaten, bruised, crushed, flouced and shaken, but never – oh the pity of it – never mashed”. Notwithstanding the fact that I am intrigued by the notion of flounced potatoes, I have a certain amount of sympathy with the woman’s stated position on what some people do in the name of mash.

The piece is contained in Mark Kurlansky’s book Food of a Younger Land, which presents a selection of material written for the America Eats project during the late 1930’s and early 1940’s. The project was shelved because of the onset of America’s participation in WW2 and such material as had been written was archived and, until recently, largely forgotten about. 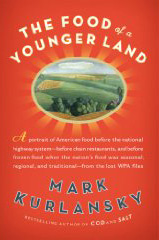 I first came across the book when I was in the States earlier this year and heard a radio interview with the author on KQED. I quickly started taking notes. The minute I got wind of a multi-page rant about mashed potatoes, I knew that I would have to get my hands on a copy, if for no other reason than that.

While the mashed potato article is probably the most entertaining individual piece in the book, it is, as a collection, a fascinating peek at American eating in the days before frozen food, fast food and the advent of the national highway system. A time when people didn’t have to make a point of their food being regional and seasonal because that’s simply the way things were by default. In fact, our mashed potato advocate had this to say about spuds and seasonality:

Of course grandma had sense enough not to try to serve mashed potatoes the year round… (she) would have been shocked if anyone ever intimated that a mashed potato could be served before autumn.

She makes an excellent point. Firm new potatoes do not a good mash make, so you’ll have spuds at their early summer best if simply boiled or used in salads. Besides, life is more interesting if mash is off the menu for at least a few months of the year. As for flounced potatoes, it seems that it might be best to avoid them altogether.