Dig Up, Dig In

Let’s play a game called “If you had been in my house for dinner last Saturday.”

I’ll tell you about the dinner and you have to guess what made it particularly noteworthy, ok?

If you had been in my house for dinner last Saturday: 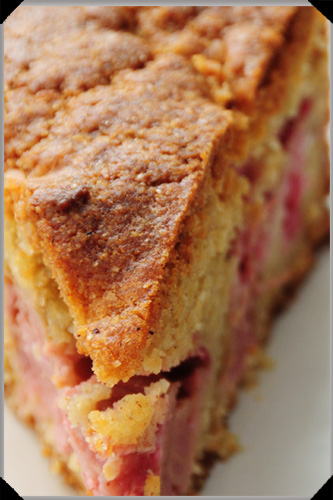 By which time you would have forgotten all about the dinner game, but possibly realised in a haze the next morning that the noteworthy feature of the evening was that all of the vegetables had been variously dug, pulled, picked and generally harvested from Spud’s own back garden. There were the Duke of York potatoes that had bucked the otherwise low-yielding spud trend. The chard that got a head start before the slugs discovered its whereabouts. Courgettes from one of the few squash plants to get past the germination stage. The most fragrant garlic from a lone garlic bulb, the only one of many planted that grew. An almost lemony sage from the herb pots out on the deck. Rhubarb which had decided to engage in a little end-of-season spurt of growth. Red winter onions, good for relish and more. And even an appearance from last year’s crop of green tomatoes, in what is now a well matured pickle. Yes, a bounteous spread indeed and probably worth getting somewhat pickled yourself for.

If you were to leaf through the contents of my cookbook stand, chances are you would find this recipe for rhubarb cinnamon torte on a little piece of card, handwritten by my mother. Mum got the recipe from Big Sis #1 and I have no idea where she got it from. Resident Sis, meanwhile, is in the habit of making it whenever there is rhubarb about and it’s always a good day when she does.

Now, as to the name, a torte is not actually a high-falutin’ name for a tart but, rather, a cake of central European origin involving many eggs and usually ground nuts. So I guess that this is indeed a sort of a torte. Or a cake. Or just something nice to have with a cup of tea. Whatever.

A note on the mixing method: The original instructions simply say to mix all of the ingredients (except the rhubarb) together, ’til it forms a ball. They don’t elaborate on any particular method of mixing. Sis says she has used the creaming method, creaming the butter and sugar, then adding the wet and dry ingredients, though last time she says that she just melted the butter, added wet ingredients to dry and the results were entirely lovely. That’s the method I’ve tried myself and included here. 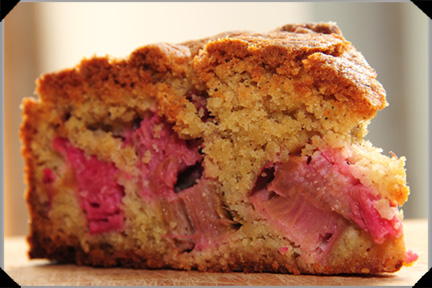