The truth is, folks, that not everything that pops into the what-shall-I-make-now compartment in my brain turns into kitchen gold.

A case in point is last Sunday’s baked alaska-like effort. It was no more than a ginger-nut biscuit base plus frozen berries plus vanilla ice cream plus meringue, but (a) it revealed that my meringue technique needs work and (b) as a whole, it was just awfully sweet (and I mean awful in the tragic sense). It was only salvaged by the addition of lots of plain yoghurt and lots more frozen berries. Ho hum. 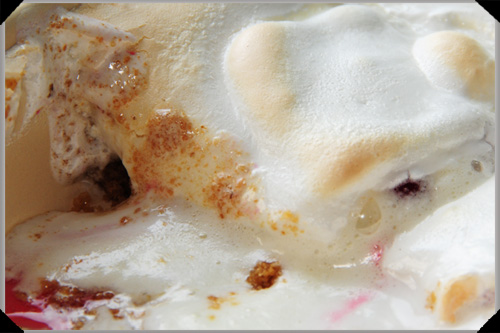 In the spectrum of possible kitchen disasters, however, it was by no means the worst and, as Jenni has commented elsewhere, it’s our less-than-successes that can be most instructive. And then, as I read Susan’s post over on Wild Yeast about her dismal daring bakers episode, I got to thinking about what might separate a minor case of bad kitchen luck from an epic, no-holds barred, culinary disaster. And so, I herewith present (with tongue firmly in cheek) a handy guide to identifying the crème de la not-so-crème of make-or-bake failures.

The potential pitfalls of kitchen activity are many, but how bad was it, really? Collect points across multiple categories and find out.

Yeah, but could you eat it? If a fundamental requirement of kitchen effort is to produce something edible, then how did you do?
[5 points] The dish tasted good but was just not at all what you expected (and it always helps to remember that a little re-branding can go a long way in this case).
[10 points] It didn’t taste good, but was still edible with some emergency additions.
[15 points] Only parts of the dish were edible.
[20 points] The entire dish was not actually fit for human consumption.

Did you need to avert your eyes? Ugly food can taste great but the look of a dish does have a significant bearing on whether we want to let the stuff near our mouths.
[5 points] The dish either looked distinctly unappetising or was very far removed from the way it was supposed to look. And not in a good way.

Multi-talented? It’s bad enough when you’ve got a one-dish disaster on your hands but you score extra if you had multiple simultaneous mishaps.
[10 points] More than one under-performing dish in a single meal.
[15 points] The meal as a whole was sufficiently bad that you had to order takeaway instead.

Collateral Damage? Sometimes it’s not just the food that suffers.
[5 points] One or more utensils were harmed in the making of this dish.
[10 points] You caused some expensive damage to a major kitchen applicance.
[15 points] Multiple appliances busted.
[20 points] The fire brigade was called.

Personal Injury? Were there any burns or cuts to accompany the pride that was already wounded.
[5 points] One minor injury to your person.
[10 points] Multiple minor injuries.
[20 points] Serious stuff, requiring medical attention.

Third Parties, Dinner Parties and Others… Remember, if nobody else was present and there was no evidence that couldn’t be disposed of, then, hey, it never happened. Otherwise:
[5 points] There was at least one witness, of the family or close friend variety.
[10 points] Other people were present, as part of an occasion or public event. Having to fess up to a cyber-audience about your failures also counts.
[15 points] Minor physical injuries sustained by others present.
[20 points] Throwing up. By anybody.

That which makes it less of a fail
Adjust your scores downward if any of these apply:
[minus 10 points] The events were the result of circumstances completely beyond your control. That power cut really couldn’t be helped.
[minus 5 points] It wasn’t kitchen gold but comedy gold. Hooray for the possible start of a career in stand-up.

After all of that, Sunday’s dessert episode only clocks up a measly 15 points – 10 for being edible after a salvage operation and 5 for having a family witness. I know I can do worse (or better, as the case may be). What about you?