It was while I was in the process of scoffing my gooseberry curd [1], that it occurred to me that tangy redcurrants might play well in curd too.

So, I adapted the gooseberry curd recipe, and, in an attempt to create a thicker curd than the last time out, I used egg yolks instead of whole eggs. I also borrowed Jenni’s [2] method of making curd over direct heat, stirring madly, because she doesn’t like to wait for a double boiler to get hot enough. All of which was aimed at making a batch of curd thicker, quicker. And did it work? Well, see how those berries are sitting and not sinking? Yeah, that’s thick enough. 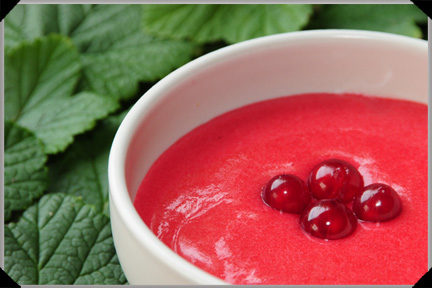