It’s not that I want to take sides or anything, but my onions are putting in the kind of show that would make a parent proud, while those low-yield spuds seem to be hanging out with the slackers at the back of the class. Those spuds will be made to stay late and work extra hard, I can assure you, but that’s a post for another day. Today, it’s all about the red winter onions, which have been doing their slow, steady growing thing for about 9 months now and are finally at the kitchen-ready stage.

While the onions were gestating, the fate of at least some of their number was sealed when I discovered Laragh Stuart’s sweet onion relish. It was one of the many tasty things that I picked up at the food market in Bloom last month. I devoured the little container of same in fairly short order, taking only as much time are it required to (a) spoon the relish onto crackers along with some Bluebell Falls goat’s cheese and (b) shove the entire crackery package into my mouth.

The ingredients list on the container of relish was pretty short – red onions, vinegar, sugar, salt and caraway – so I knew that the first task for my own red onions upon graduating from the garden would be a round of post-graduate relish work. And the report-card comments? Based on the research so far, this is what we got:

Homemade onion relish: May not be exactly the Laragh Stuart version, but very nice on goat's cheese all the same 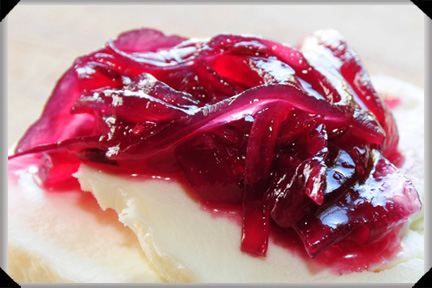 As you’ll see, I really didn’t do anything terribly complicated here, just fired all of the ingredients into a pot and let it simmer for about an hour. The vinegar and sugar quantities are based on what is hopefully a happy medium between a couple of different batches that I made, the first of which definitely turned out a lot sweeter than the original and the second, which was considerably less so. The truth, as always, is somewhere in between.

And now for something completely different (or at least something that is unconnected in any way to onions or the relishing thereof). For any of you loitering about the Kinsale area this weekend, you may be interested to know that I’ll be taking part in a panel discussion on blogging this coming Saturday, the 18th, as part of the Kinsale Arts Week. Rumour has it that I know something about the subject. Fact is I’m going to be watching my Ps & Qs (and probably some other letters as well) around the Sweary Lady, who’s also participating, as are Claire Mulvany and Fiona McCann. Come along and make of us what you will!