Stilts, Gooseberries, And A Spud For All Seasons

Ah, summer in Ireland. Where you’re just as likely to be bathed in rain as in sunshine and where the organisers of outdoor events play a game of Russian roulette with the weather and hope that they are hit, if not with sunshine, then at least not with a fatal shot of precipitation.

As I made ready to head to the Midsummer Fair in Temple Bar on Sunday last, I peered out at grey skies and a persistent drizzle. It didn’t look good for folks wanting to picnic and be entertained while lounging on the faux-grass in Meeting House Square.

Still, I donned my rain gear and arrived to find a few other hardy souls enjoying the trad music on offer, some even be-seated on the I-can-believe-it’s-not-grass patch. More importantly, I was able to satisfy my morning’s need for caffeine at the coffee angel stand, my portable coffee of choice. The day was looking up.

Sure enough, by mid-afternoon, the weather had taken a decided turn for the better and there was little space left on the artificial green, with families being entertained by Punch and Judy, face-painting, magic tricks and periodic encounters with a man on stilts (equipped with stilt welly boots, de riguer for stilting in the Irish climate), and another fellow on a unicycle. Good family fun and, better again, all for free. 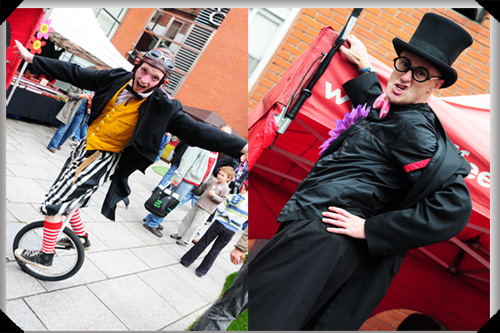 The market stalls surrounding the square combined food, crafts and books, representing a mix of the regular weekly Temple Bar markets. I, of course, was really there for the food and, while the number of food stalls was relatively small, I still managed to while away a goodly amount of time doing a tour of what was on offer. 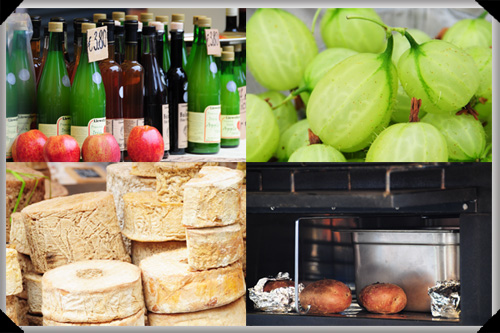 I was delighted to see gooseberries for sale from Malone’s Fruit Farms and much discussion of the berry ensued with the delightful Bernie. I was on a promise to make some gooseberry curd, having mentioned the possibility to Gastroanthropologist and, given that my Ma’s gooseberries are not quite ready yet, I secured some from Malone’s instead. I also nabbed some of the excellent sprouted chickpea hummus from Natasha’s Living Foods and some fabulous apple ice cream from Llewellyn’s.

I checked it out and read that it has room for 230 potatoes. Colour me impressed. My baked potato came complete with the story of the Vivaldi potato, a UK variety favoured for baking and so-called because, yes, it is a spud for all 4 seasons. Meanwhile Roy is on the hunt for a regular vending spot for his baked spuds, so I wish him luck with that.

Finally, it was time to take my leave. I could have lingered, enjoying the temporarily grassed Temple Bar, but my gooseberries were, by then, demanding my attention and some gooseberry curd ensued.

This is taken from Marguerite Patten’s excellent Jams, Preserves and Chutneys handbook.

Truth be told, this was actually my first time to make curd of any description and, if success is measured as the rate at which I’ve been spooning the results into my awaiting gob, then this was of the rip-roaring variety. I would say, however, that my inaugural batch of curd didn’t thicken up as much as I thought a curd ought to. The recipe calls for either whole eggs or, if you prefer, you can use egg yolks only (in which case you double the amount of egg-age). I went the whole eggs route on this attempt but am thinking that it would perhaps thicken better with yolks only. However, I’m going to turn this one over to Jenni and request further analysis on the consistency front. 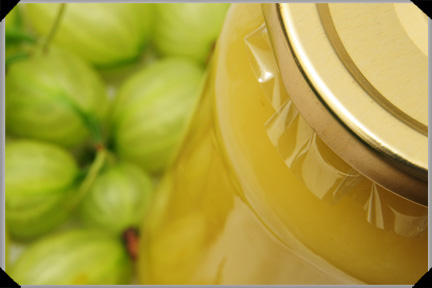