Fast forward a few weeks and I am back at home base, suffering from bánh mì withdrawal and thinking that I should, in Greg’s honour, do a Spudly take on those fine Vietnamese concoctions. My first thought was to go the route of bánh-mì-meets-chip-butty, replacing the pork with chips and the baguette with toasted batch bread and creating what might well be the world’s first bánh butty. In fact, next time I’m feeling the need for a little carb-on-carb action, I think I will make just that. 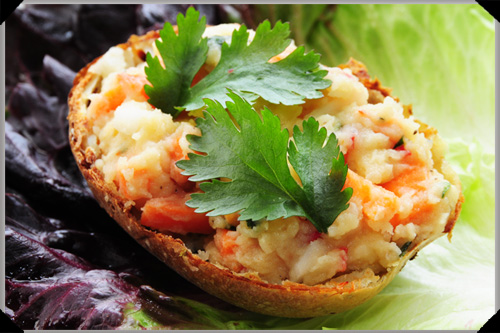 What I made today, though, wasn’t a sandwich at all, but a baked potato stuffed with some of the things you might otherwise find gracing your typical bánh mì. A bit of an east-west mash-up you might say. It won’t ever take the place of the experience that is a visit to Saigon Sandwich, but it made for a tasty lunch all the same.

For this, I took inspiration from Greg’s recipe for bánh mì, as well as browsing a few other bánh mì recipes on the World Wide Interweb.