I was confused earlier today.

As to what I should eat for dinner, I mean.

Of course, it’s not an uncommon dilemma. Much has been written about the complex web of issues that can underlie the seemingly simple question of what to eat. In this case, however, it was merely a case of indecision brought on by the weather. I mean, if the weather can’t make up its mind as to what it is doing, then how, dear reader, can I?

See, first it was warm, unseasonably warm and gloriously sunny for days. Then it started cooling off, before the temperature then decided to take an outright nosedive, accompanied by whipping winds and a biblical downpour that pummeled everything that remained out of doors. Eventually, the deluge abated but it was still cool enough outside that I wasn’t up for ditching my trusty fleece layer. And today, there was sun again and, despite the earlier chill breeze, a bit of warmth in the afternoon.

All of this has played havoc with my internal menu signaling system. I can’t tell – is it time for a summery salad or a wintery stew? 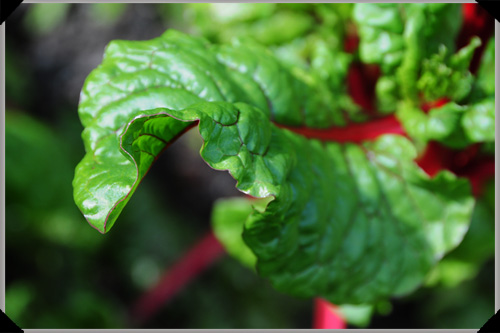 In the end, rhubarb chard held the solution to this particular omnivore's dilemma

As I contemplated this matter, I could see my somewhat battered-looking rhubarb chard from the kitchen window. The chard had itself been put through the mill by the recent weather. Encouraged to bolt at a fierce pace by our little blast of summer, then all but flattened by the downpour of the following week. The chard needed to be had for dinner and that was that.

And because I didn’t feel like putting any further thought into the matter, I used the chard to make my go-to leafy greens recipe with lentils.

And because I always enjoy this with rice and yoghurt, I saw no reason to do differently this time.

And because, as Mark Bittman has been known to point out, crispy fried onions go so well with this kind of lentil thing, I made those too.

The only thing now is, whatever shall I have for dessert?

Lentils with Chard (and a couple of other things) 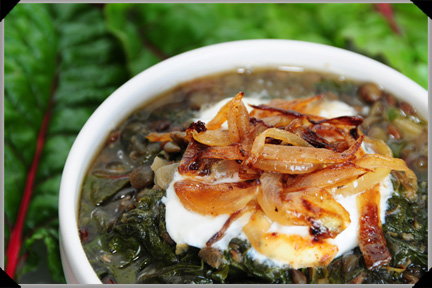 This is adapted from Madhur Jaffrey’s recipe for lentils with spinach from my well-thumbed copy of her Eastern Vegetarian book. The recipe calls for green lentils, which is what I usually put in, but this time around, I used the smaller, tastier, puy lentils, substituted chard for spinach and threw in some yoghurt and fried onions for good measure.

To top it off (optional, but nice):