I do, as a rule, love grand displays of fresh produce. I see mounds of colourful fruit and veggies and I immediately want to relocate the lot to my kitchen so that I can have my wicked culinary way with them.

But what if the edibles are for display only and not destined to sate anything other than visual appetites? That, I’m afraid, I view somewhat differently. 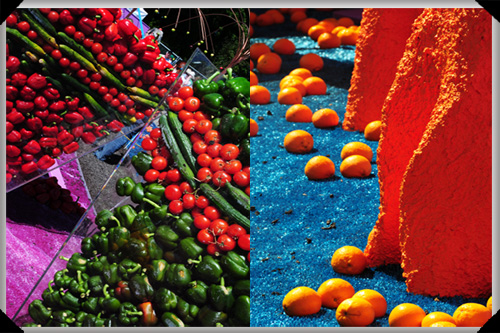 At Bloom last weekend, I took several spins around the Keeling’s Naturally Fresh Garden, a Willy Wonka-esque display involving piles of fruit and veg posed in abstract forms – large cones filled with peppers, tomatoes and cucumbers, pyramids of bananas, metal trees growing apples and pears – all set in a space of vibrant purple and yellow and blue and orange. It was eye-catching to be sure but, by the last day of the show, I couldn’t help but be exercised by the sight of so many bananas browning and peppers wrinkling away in the sun. While there was delight at the colour and playfulness of the display, I was not alone in wondering what future lay in store for the soon to be ex-display fruit and in mentally tut-tutting at what appeared, to me at least, to be the waste involved. 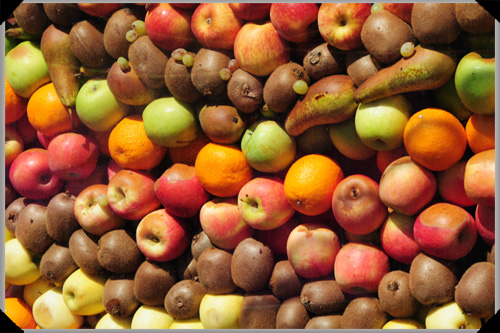 Like the proverbial dog with a bone, I got more than a little fixated with the destiny of the display items and got in touch with the garden’s designers, Paul and Orla Woods. Orla graciously responded, letting me know that the fruit that was still in reasonable shape at the end of the event was handed out to attendees and what remained would be composted. She did also point out that the big display containers had hollow centres, such that the amounts used to fill them were less than one might perceive. All of which was fine, to a point, but I guess my preference would have been for a display that celebrated the food as, well, food. If, as in the official blurb, the intent of the garden was to “encourage people to enjoy the sensory and fun aspect of fruit” then is not the ultimate sensory appreciation of fruit via the sense of taste? We want people to delight in the sight of fresh garden goodies, sure, but, more importantly, we want that they should eat them too, don’t we?