Blessed Are The Cheesemakers…

…or so goes the line from Monty Python’s achingly funny and irreverent Life of Brian.

And let it be known that I’m quite happy to give it up for cheesemakers everywhere. I can’t really imagine life without cheese (and I’m sure that Grilled Cheese Shane would agree with me on that). I’ve even dabbled in rudimentary cheesemaking myself, at least to the extent of making homemade Indian cheese or paneer a few times. 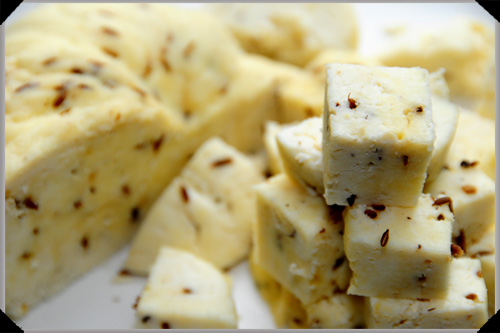 It’s just about the simplest of cheeses to make because it consists only of the curds that remain when boiling milk has been separated using some vinegar. It’s endlessly versatile but, then again, cheeses are like that. You can use the drained curds as is in salads or as an alternative to tofu in stir fries or as a (less creamy) replacement for ricotta. You can press the paneer into patties and then slice and fry it or cut into cubes and use in any number of Indian recipes. You can flavour it or not, as takes your fancy. Traditionally it’s made with buffalo milk (same as buffalo mozzarella) but, for those of you not on milking terms with any buffaloes, regular cowjuice will do nicely. Please use the full-fat, as-nature-intended milkstuff, though. You’ll thank me.

Saag Paneer is one of the regular features of Indian restaurant fare, usually a spicy, saucy concoction, the main components of which are spinach (and sometimes other leafy greens) and chunks of pressed paneer. Here spinach and paneer curds have joined forces in a simple salady thing that you might eat for lunch along with some crusty bread and nice tomatoes. It’s like saag paneer just took a Mediterranean holiday. 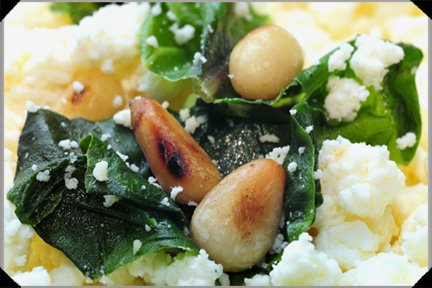 This comes from my oft-consulted copy of Madhur Jaffrey’s World Vegetarian.