Well, well, I feel like a very European spud today.

Thanks to the votes of you nice folks out there, this here blog was the English-language finalist for the first Euro Blog Awards. The final selection was made by way of an old-style Eurovision jury vote on Friday at the nonick conference in Bilbao and what a nail-biter it was, with the Daily Spud leading the pack until the last jury declared. In the end, it was 2nd place for the Spud, losing by a mere point to the eventual über-blog, Netzpolitik. Still, it made me feel all warm and fuzzy, in a silver medal kind of way.

To mark the occasion, I thought I should do something a bit continental. With that in mind, I took up the call by Mindy and Chef E to have a go at making a flammekueche for their Monday Mouthful.

A what you say? Depending on your choice of language, it’s a flammekueche, a tarte flambée or a flammkuchen, a speciality of the Alsace region, consisting of thinly rolled bread dough spread with crème fraîche, onion and bacon and traditionally baked in wood-fired ovens. And, yes, it is very like a thin crust pizza.

Now, I chose not to make mine with bacon, but with spuds, because I’m nothing if not predictable when it comes to tubers. I scoffed quite a lot of this for lunch and have been picking at it periodically since. Someone should probably hide the rest of it, at least until tomorrow. 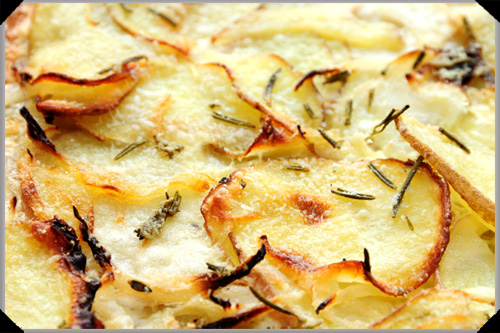 For this, I used Mindy’s sample flammekueche recipe as a guide and also had a browse through some potato pizza recipes and came up with this amalgam.