The Apple Of My Dreams

It would only be a slight exaggeration to say that I’ve had more apple crumbles than hot dinners.

We always had home-grown apples as kids (still do, in season) and apple with crumble topping is something I very much associate with home.

So how is it, then, that my entry for a roundup of desserts inspired by travel is an apple crumble? For, indeed, this months Sugar High Friday, being hosted by Heather at Diary of a Fanatic Foodie, has travel-inspired desserts as its theme. I guess I have some explaining to do, so here goes… 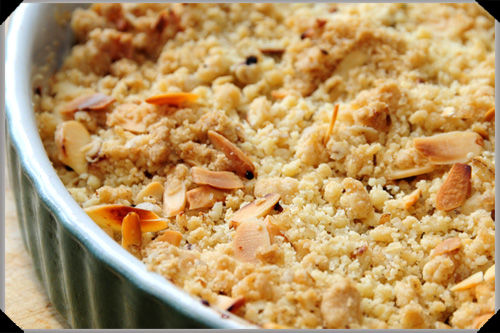 The stuff of crumbly, apple-filled dreams

Picture yourself in the foothills of Nepal, trekking up and down the Himalayan inclines with a rucksack on your back.

You’ll be staying in very humble lodgings along the way – think chicken shed minus the chickens and you get the idea.

The food you’ll get at the end of each day will be simple fare but, when you’ve walked all day at high altitude, believe me, it’ll taste good. Some Western dishes are offered in addition to the local staple of dal bhat, but you largely steer clear of the non-local food, because you know that producing pseudo pizza and such means that your hosts must use additional firewood, which is a scarce commodity in these parts. However… you can’t help but make an occasional exception when the lodges offer decidedly non-local apple desserts. It’s the promise of a taste of home and, when you see a sign advertising “Captain’s Apple Scrumble” you take note. You pass on your way but remember the name that combines apple + scrumptious + crumble and dream for many footsore days about having that dessert until, on the return leg of your trek, you pass that point again and, finally, the scrumble is yours. For the taste of home it brings, it is worth the wait.

On a completely unrelated note, it came to my attention this morning via Twitter, that I appear to have been nominated for these Euro Blog Awards, which was news to me. It’s a bit like the Eurovision Song Contest, but for blogs apparently. Anyway, you can vote for me here if you like, at least until tomorrow, when voting closes (yeah, I know, nobody told me!). Just so long as nobody expects me to sing.

Goodness knows what was actually in Captain’s Apple Scrumble, but this is the crumble I made today while reminiscing about it. A few notes: