Spud Sunday: Can A Potato Shake?

…and the answer is, why yes it can, in a milky kind of way. 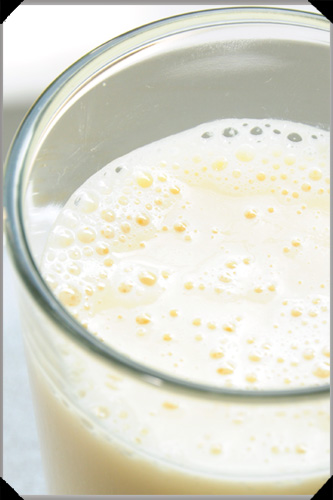 What exactly would possess one to even think about making a potato milkshake?

But still, a potato milkshake? The mere mention of which was enough to strike fear into the heart of at least one of the other party attendees? I can only plead that it is not as bad as it sounds.

I happened across the idea in the eye-catching coffee-table book Potato by Lyndsay and Patrick Mikanowski, which included a recipe by Gilles Choukroun for a savoury potato milkshake, flavoured with parsley and cumin. It caught my attention but in a “frankly that sounds odd” kind of way. I simply had to give it a whirl, though, so that it I could confirm that, in point of fact, it was odd.

Thing is, it was not so odd that I didn’t think there was merit in coming up with a sweet version instead. And so, after some playtime in the kitchen, a blend of cooked potato, milk, honey and lecithin came together as an offering for guilty pleasure consumption. And people lived to tell the tale.

I will confess that it is still somewhat of a work-in-progress. Unlike my first home sample, the super-sized batch whizzed up on the night of the party was (in what you might call a case of blending under pressure) a bit OTT on the potato and honey fronts. I had also wanted to add some malt but had none. No matter. I will send the formula back to the lab for minor tweaks and return to the topic anon.

My other contribution to the evening was some Elvis bread, which I have been wanting to make ever since I saw it on Recipe Play. All you really need to know is that it’s peanut butter, bananas and honey rolled up in pizza dough, and if that results in an understandable urge to make some yourself, you can head on over to Will’s video to see how it’s done. 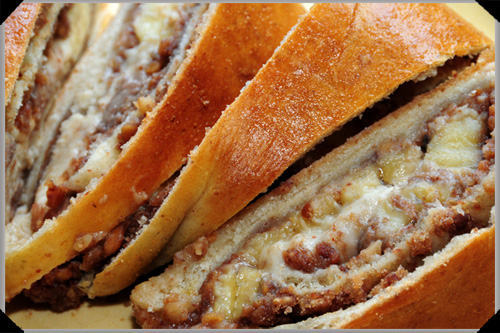 As for the rest of our guilty carb-fest, Aoife Mc has the full colour low-down on the lot, which, in addition to the milkshake and Elvis bread, included all of the following good-for-the-soul food and drink:

Oh, and wine. Plenty of wine.

All of which was very pleasurable to those present, who, along with our hosts Aoife Mc and Niall, included Rick, Raptureponies, Darragh, Loreana and a couple of people who (shock, horror) don’t have blogs, resident sis and Jocelyn. We all left wine-filled and artery-clogged but happy. And, yeah, maybe just a tad guilty, though I daresay, given half a chance, we’d all do it all over again!