Spud Sunday: The Poetry Of Potatoes

Who knew there was quite so much poetry written on the subject of potatoes?

This matter was drawn to my attention by Wal, who very thoughtfully supplied me with his slightly amended version of this gem, which appeared in An Anthology of the Potato, a collection of potato poems published in 1961 for the Irish Potato Marketing Company.

We praise all the flowers that we fancy
Sip the nectar of fruit ere they’re peeled,
Ignoring the common old tater
When, in fact, he’s King of the Field.
Let us show the old boy we esteem him,
Sort of dig him up out of the mud;
Let us show him he shares our affections
And crown him with glory — The Daily Spud

I think I can guess which line he amended and I blush.

The piece of verse was by way of wishing yours truly well on future spudly endeavours, given that this was my last week at work. I mean my Not-The-Daily-Spud work. The Is-The-Daily-Spud work continues and (woohoo!) it looks like I’m going to have some more time to play with my food now.

Speaking of playing with my food, I decided to give what remained of my kimchi the potato treatment. Just think kimchi and chips and you’re most of the way there. It happened like this:

While marking the occasion of my departure from work at the Market Bar during the week, we ordered a rather large quantity of food to go with our beverages. The bounty included some enormous bowls of patatas bravas (fried potato chunks with a spicy tomato sauce and what tasted like garlicky mayonnaise). Days later, after the haze which resulted from the visit to the Market Bar (and beyond) had finally lifted, the thought emerged that I could make my own patatas bravas, but with kimchi as the spicy element. Meaning, I roasted some bitesize potato chunks, topped them with shredded kimchi plus a mix of half-n-half mayonnaise and yoghurt along with a touch of crushed garlic and salt, and served the lot up as a brunch-type affair with scrambled eggs. Let’s just say you know you’ve done something right when plates have been cleared of food and you’re asked if there’s more.

My only afterthought was that, good ‘n’ all as this confusion of foods tasted, I know from Greg that the Koreans would probably laugh at us for eating kimchi this way, with not a grain of rice in sight. I’ll just have to tell them that I used a bit of poetic license and hope they understand. I think it best, however, not to mention the plans I have to go further and create the world’s first kimchi chip butty. Some things they don’t need to know! 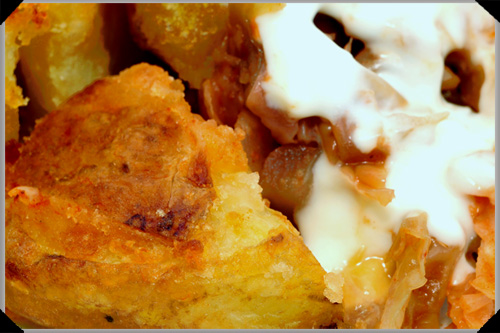 Not quite kimchi and chips, but close