My Kind Of Kimchi

Dearie me. I was once more beset by cabbages.

Multiple heads of the green stuff were inhabiting my kitchen and wearing a look that said if I didn’t do something soon, their mate turnip would show up and then there’d be real trouble. This time, however, I would take charge of the situation. Nothing like a bit of fermentation to show those brassicas just who was boss. Yes indeed, the time had come to make kimchi. 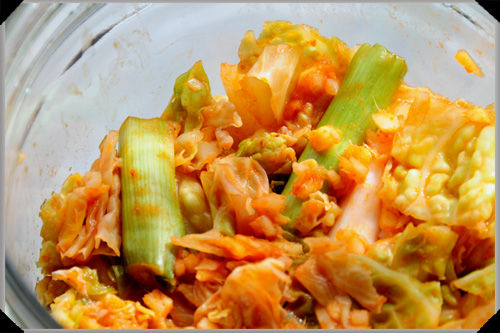 Now, kimchi is really an umbrella term for the Korean approach to preserving raw vegetables. They’re seasoned in various ways, fermented and then (as I had seen at first hand on a visit to Seoul) eaten with just about everything. Lots of vegetables get the kimchi treatment but cabbage is probably the vegetable most commonly associated with it. 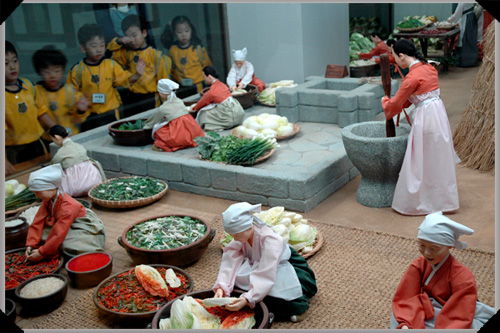 Traditionally, vegetables for kimchi were packed into large earthenware pots and then buried in the ground while they fermented over the winter months. I had no plans to bury anything as part of the war on cabbages and, luckily, there would be no need to go to that extreme. While foraging around the internet, I found that David Lebovitz, he of all things chocolate and ice-creamy, had dabbled here and there with making kimchi. Using his later version as a guide, I launched my cabbage offensive and a mighty successful campaign it was too.

What I produced may not have been authentically Korean – I didn’t have the Korean chili pastes and powders, so I used harissa instead – but, with its nice chili/gingery bite, I have had no problem devouring vast quantities of this with all manner of things. With eggs, with rice, with noodles, with itself. Not with potatoes, though. Well, not yet. It’s only a matter of time, however, because when next I am beset by cabbages, I will be making this again. 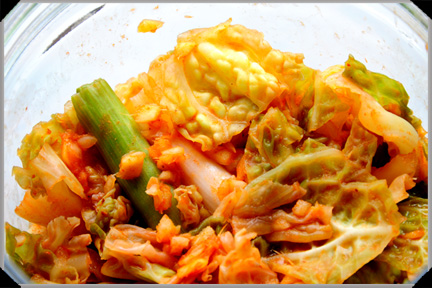 This was adapted from the David Lebovitz formula posted here, which, in turn, was based on Alex Ong’s version here. My version involved using a different kind of cabbage, adding more ginger and using harissa as a substitute for Korean chili paste, of which I had none. It is thus not an authentically Korean preparation, but it’s my kind of kimchi all the same!