So what do you do when someone hands you a bag of ingredients and a recipe, and the title of the recipe is “Sticky Toffee Pudding“…?

You think about it for approximately a millisecond, then you go forth and create some sticky toffee goodness, that’s exactly what you do. This is no time for fooling around, April-induced or otherwise. 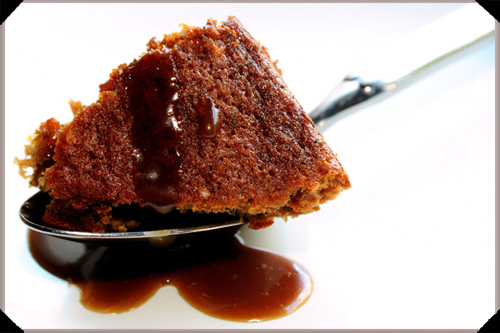 The bag of raw materials had come to me by way of my sister-in-law. She had procured the ingredients at the request of her daughter, who made this pudding for her folks at Christmas-time. After Christmas, the daughter returned from whence she had come, but some of the leftover ingredients, including not one, but two kinds of muscovado sugar remained. I expressed an interest in the remnants and so the remaining sticky toffee wherewithal made its way to me. And from me to you, ‘cos that’s the kind of girl I am.

There remains little else to say, except that, while you can certainly substitute other unrefined brown sugars for either the light or dark muscovado, they do lend a nice treacly note, particularly so in the toffee sauce. But do play around with it. You’re allowed to, you know.

And, finally, apropos of nothing much in particular, if you’ve ever wondered just how things look on my side of the Internet, you can take a looksee at where it mostly all happens here…

I have no idea where this particular version of the recipe originated from, other than my niece, though it’s similar to many sticky toffee pudding formulae out there on the Interweb. In any event, I ended up tweaking it slightly myself anyway, like putting kahlúa in the toffee sauce. I did like that particular tweak very much…

In terms of general approach, Jenni would be proud of me for recognising the cake bit as an example of the creaming method and also, I think, for adding a touch of salt where there was none.

For the cakey bit:

For the sauce bit: