It’s safe to say that my father knows a lot about potatoes. He has lived long enough to remember an Ireland where most people grew their own and where the potato really was still a hugely dominant part of the rural diet. “Praties and dip”, he tells me, was a style of eating potatoes still prevalent when he was a boy growing up in Kerry. And no, it’s not remotely like anything you might be imagining right now. Banish whatever images of chipped potatoes and sour-creamy dip have come to mind. Instead, picture yourself with some boiled potatoes, a bowl of milk and a bowl of salt. Take the warm spud, dip it in the milk, then dip it in the salt and eat. Et voilà, there you have praties and dip.

Frankly, I’m not likely to start eating spuds this way (except, at a push, when I have some freshly dug new potatoes on my hands). Yesterday, however, when I found my cupboards devoid of crackers, I was inspired to try my hand at using potato to make something crackeresque in nature, and just right for dipping. A little homage to “praties and dip” as it were. Though mainly I just wanted some crackers to feed my cheese ‘n’ crackers addiction.

The idea was a decent enough one. However, I had never attempted to make anything that you might describe as a cracker before and here I was, going to wing it first time out. I took some flour, rubbed in some butter, stirred in grated parmesan and chives, combined into a dough with some mashed potato and milk. I chilled it. I rolled it out thinly, cut out the crackers, whacked them in the oven until they were golden… 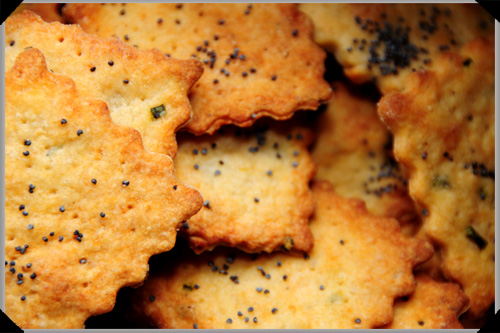 They sure do look the part

…but they weren’t what I would call killer crackers. A little bit too much chew where the rolling of the dough wasn’t super-thin and a little bit overdone where it was. Now, don’t get me wrong. They weren’t bad and I’ve eaten quite a lot of them already (they are parmesan-cheesy after all) but suffice to say that the formula is not ready for the big time just yet. Indeed, the inclusion of potatoes in the dough might be at odds with the requirement for ultimate cracker crispiness. Hmmm. The search for Spud’s perfect cracker will continue.