It was a somewhat shocking realisation. Reeni’s recent post on pasta as her muse alerted me to the fact that pasta has not gotten so much as a look in here at The Daily Spud. I count precisely one passing mention of that most Italian of foodstuffs since this little blog started. What’s with that, exactly? It’s not like I don’t like it or anything. 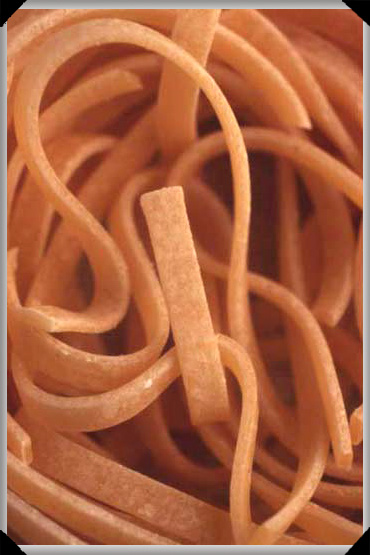 Come in, linguine, you are welcome here

I guess it may have something to do with the fact that, while pasta and spuds may not be arch-rivals, they do, except for gnocchi, have a tendency to give each other a wide berth at the dinner table. Smitten Kitchen’s recent recipe for penne with potato and rocket may be the exception that proves that particular rule. For most people, it’s an either/or proposition, and given the dominance of the spud in this jurisdiction, pasta got relegated to the sidelines, apparently unloved. Amends needs must be made. How’s about a simple tomato-based sauce to start.

This sauce uses that French mirepoix trio of onion, carrot and celery, along with some garlic and tomato. The kicker is the vodka, which encourages the tomatoes to give up their alcohol-soluble flavours. I only lately happened upon the use of vodka in tomato sauce, though I have, er, happened upon other uses for vodka before this. You can, of course, use wine or even port instead, and they bring their own flavours along. The vodka seemed to let the tomatoes shine and left me wondering, in a good way, what the hell just happened to my sauce. As for the addition of toasted sunflower seeds, I’ve been putting them in my tomato-y pasta concoctions since approximately forever.

This is just a particular incarnation of a simple pasta sauce that happened in my kitchen lately. To get the low-down on a general framework for putting together this kind of pasta sauce, you would do well to check out Jenni’s guidelines for same. 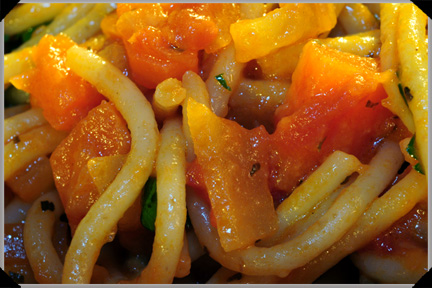