collector and exhibitor of rare, old and unusual potatoes

So proclaims the business card of the fabulously enthusiastic Dave Langford, whom it was my distinct pleasure to meet today at the Organic Centre in Rossinver, Co. Leitrim, at their annual celebration of our national tuber.

Myself and resident sis had made the trip out west for said Potato Day and were guided into the depths of lovely Leitrim by our western correspondent MGH. On display at the open day, courtesy of the aforementioned potato maestro Dave, were a large sampling of the 150 or so varieties of spud that Dave has in his collection, in suitably varied shapes, sizes and colours.

Not one to pass up the opportunity of expanding my knowledge of all things spud, I introduced myself to Dave and got straight to the point. What did Dave think of Shetland Blacks, that heirloom variety that I was so excited to have sprouting at this very moment in my shed. What he said was….

He later expanded that to “bland and a bit mealy”.

Well, that stopped your roving reporter in her tracks. It was not what I had read. Still, the man has partaken of far more potato varieties than most and was a member of the UN steering committee for last year’s International Year of the Potato to boot. He clearly has a finely tuned potato palate and an opinion worth listening to. He reckoned that some of the heirloom varieties that have been dusted off and brought back into cultivation were being chosen somewhat more for their aesthetics than their taste. There were heirloom varieties out there that were tastier than the Shetland Blacks, but they just didn’t look as good. Like so many other things, it seems that we judge there to be beauty or otherwise in the eye, skin and flesh of the potato, and act accordingly.

And so we moved on from Shetland Blacks and talked of much else, from the range of varieties to planting traditions to potato-as-dessert. As I made ready to take my leave, Dave gestured at the bounteous display of potatoes. 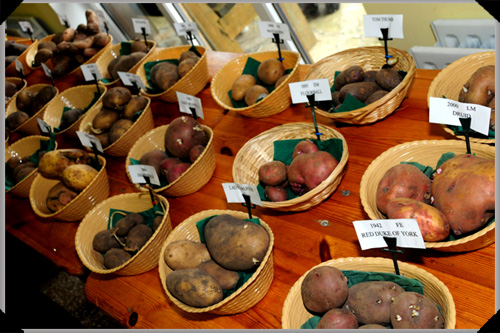 Just some of the varieties on display

That stopped your spud mistress in her tracks for the second time that afternoon.

These were part of his display collection. These were not for sale. But I was about to have my pick. Spud’s Saturday had been made by a mention in The Irish Times weekend supplement and this offer was about to make for a truly memorable Spud Sunday.

I picked a sample of the Champion variety, one I had heard my father mention. After that, I let Dave choose and he selected a May Queen (similar to, but better than, British Queen in his opinion) and a Bloomer, which I suspect is quite rare and unusual.

So it was that I left Rossinver clutching 3 brown bags containing 3 seed potatoes for 3 different varieties, to add to the 3 varieties that I already have sprouting in my shed. A case of good things coming in threes, if ever there was one.