Now, before I get to the meat and potatoes of this post (or the potatoes, at any rate) I have a little housekeeping to do. Over the past while, a number of fellow bloggers have been kind enough to acknowledge this here potato eater in various ways and a big (and in some cases, way overdue) thank you is in order for the following badges of blog honour:

This little blog butterfly fluttered here from Heather at Diary of a Fanatic Foodie, who is not only a fabulous foodie, but a fanatic cocktail creator too. Basil and Lemongrass Martini anyone?

The Kreativ Blogger comes from Zerrin at Give Recipe. She’s been giving us all a delicious introduction to her native Turkish cuisine and to new ways with familiar vegetables. Thanks to Zerrin, I know what I’ll be doing with spinach heads in future!

The Honest Scrap was bestowed by Mama Chicken from Journey to Thrift, where she joyously produces tasty food for her family, including some superb looking bagels, without breaking the bank.

The usual thing would be to spread the love and pass these on to other worthy blogs. However, there are so many blogs that I read and enjoy that it makes it a hard task to choose some and not others, so I think you should all share a piece of the glory. Just keep writing and I’ll keep reading. 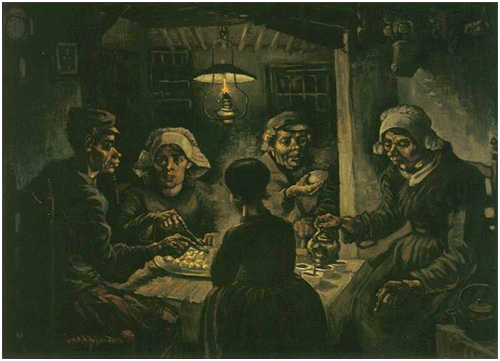 The Potato Eaters by Vincent Van Gogh - image from www.vangoghgallery.com

The other usual thing in the case of the Honest Scrap would be for the recipient to enlighten the reader by telling them ten things about themselves that the reader might not know. I’m going to turn this somewhat on its head and tell you ten things that you may not know about potatoes and potato eaters (or perhaps you’re like me and you do know these things, in which case get in touch, we should start a club). Much of the following comes to me by way of John Reader’s excellent book Potato: A History Of The Propitious Esculent. Here goes…

(1) People were eating potatoes as far back as 12,500 years ago. Yep, we’re talking late Ice Age. The remains of potatoes from this era were found preserved at a site in Monte Verde in Southern Chile along with the bones of the now-extinct mastodon, a relative of the equally extinct woolly mammoth. Who knows but that the favourite meal of the ice age chilean was mastodon burger and chips.

(2) It’s estimated that domestication of the fairly toxic and bitter wild potato started in Peru around 8,000 years ago and, even today, farmers in the Andes grow at least 400 distinct varieties of potato.

(3) Papa Llunchuy Waqachi is one such Andean potato, whose name translates as “potato that makes the daughter-in-law weep”. The story goes that if the bride-to-be does a good job of peeling this potato, she is allowed to marry her man… 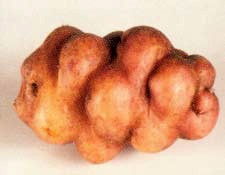 (4) All of the cultivated potatoes that we are familiar with are members of a single sub-species developed in the Andes, solanum tuberosum tuberosum (so good they named it twice).

(5) Cultivation has significantly reduced the level of toxic glycoalkaloids found in potatoes, but some varieties in common use today, including Home Guard and British Queen, still have dangerously high concentrations during early tuber growth, only passing the danger zone once the tuber matures and the foliage dies.

(6) Listen to what your mother may have told you and avoid eating any part of a potato that has turned green. It’s an indicator of those glycoalkaloids, which can be concentrated by too much exposure to light during growth.

(7) While we mostly tend to think of the potato in carbohydrate terms, it’s got some high quality protein too, especially if you eat them skins and all. The biological value of potato protein – a measure of nitrogen absorbed and retained by the body for growth and maintenance – is second only to that of eggs. In controlled experiments, people have sustained active lives for months, subsisting on potatoes and a little margarine, maintaining perfect health and without weight loss or gain. Probably not having much fun though.

(8) Someday, we will have spuds in space. Potatoes are one of the mainstays of NASA’s Bio-regenerative Life Support System, a self-sustaining food system, in which astronauts on long missions will grow their own vegetables. So, if they should ever undertake that mission to send people to Mars, they’ll be eating spuds all the way.

(9) Back down to earth and you’ll no doubt be shocked and horrified to learn that this here potato eater wasn’t actually that keen on boiled spuds as a kid. I’m over that now, as you can probably tell.

(10) That other great potato eater in my life, my Da, ain’t that keen on crash hot potatoes. He told me so the other day. He doesn’t get the slightly-mashed-but-with-skins-still-on thing. So family take note and stick to mash.