C Is For Celery 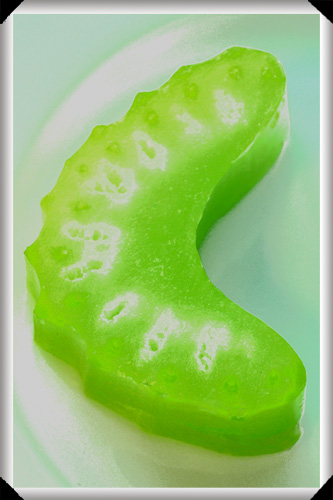 Yes, you could say that I have taken a bit of a minimalist approach to the Eating Your Words Challenge.

When the call was put forth by Tangled Noodle and Savor The Thyme to write or spell something using food or drink, a multitude of things raced through my mind. Should I bake letter-shaped cakelets, freeze some icy vowels, spell something delicate and spidery using vermicelli, pipe out some sugary iced messages or just buy a tin of alphabet spaghetti? Others, I could see, had been very creative in response to this edible poser.

In the end, however, I cast aside the elaborate preparations that were formed only in my head, got out my finest kitchen knife, applied it to the contents of my vegetable drawer, et voilà. Ladies and Gentlemen, I give you C. For celery. A vegetable that comes with its own initial. All quite self-contained, see?

So what of celery, then? A vegetable that is mostly water, some fibre, not much fat or protein to speak of and a good deal of Vitamin C (there’s that letter again). To describe it thus, however, is to miss the interesting stuff about celery. Let’s see…

The Ancient Greeks thought enough of celery to use its leaves as laurels for crowning their esteemed athletes, while Homer (that’s the poet, not the Simpsons character) mentions wild celery in both The Odyssey and The Iliad. The Ancient Romans used celery as a seasoning and also considered it to be an aphrodisiac. You can make your own mind up as to whether there may have been a connection between these two facts.

It was only much later though, during the 17th century, when celery-the-food really started to come into its own, thanks to the French, who started using it as soupstuff. Celery now occupies a place of honour as part of the triumvirate of onion, carrot and celery that, when chopped up and sautéed together, constitute the classic French mirepoix, the jumping off point for any number of stocks, soups and stews.

It is endlessly versatile. Use the stalks raw or cooked in any number of ways (well, except maybe boiling – as it says in D. G. Hessayon’s Vegetable & Herb Expert, “there are many ways of cooking celery but boiling is not one of them”). Use the leaves like parsley. Use the seeds to season. Use the root of some varieties (celeriac) for gratins and mashes. Here, in amongst the Spud archives (am I really around long enough to have archives?), it has been used thus far:

It has most certainly not, however, been used as a dessert. I found reference here to the fact that, before the incident with the volcano, the folks in old Pompeii were given to eating a dessert of roasted celery, honey and ground pepper. So of course I had to try it out. Let me just say that it was frankly a little strange as a dessert and perhaps, like much of Pompeii, best left buried.