So did ya, then? Did ya get some heart-shaped potatoes from your valentine?

I jest not. Last week’s Sunday Mirror reported that these heart-shaped roasting potatoes from France, known as Francelines, were being carried in the UK by Tescos for this years Valentine’s market. They have only become available for sale there following the scrapping of an EU ruling which had banned the sale of mis-shapen fruit and vegetables. Thus, these heart-shaped taters are no longer to be hidden away and treated as the hunchbacks of the vegetable world, but, rather, will be made available for the delectation of the wider EU populace. 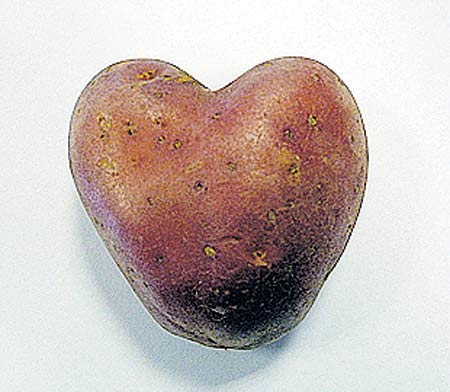 So, would heart-shaped spuds do it for you, then? Some twice-baked heart-shapes for Valentine’s dinner, perhaps? Maybe that’s not your thing but chances are it’ll do it for at least some folks. Over in the US, spuds are “officially” the most popular vegetable, at least according to a recent survey carried out by the Idaho Potato Commission and reported here in Agricultural Weekly. Ok, so the Idaho Potato Commission mightn’t be the most independent of sources when it comes to potatoes, so you may care to take their survey results (as you might their potatoes) with a rather large pinch of salt. Still, there’s no denying that the humble spud is a popular guy with a global reach, which may be the reason that there’s any market at all for such heart-shaped specimens. I have to say that I wouldn’t have any great inclination to grow such novelty tubers myself, though.

No, I have finally acquired my seed potatoes for this year from the nice people at Mr. Middleton’s and nary a heart-shaped Franceline among them. Instead, I have 3 different varieties of early potato, laid out in trays in my shed, where conditions will hopefully be cool and light enough to encourage them to sprout (or chit, in potato parlance), the aim being to encourage earlier and heavier cropping. In the collection, I’ve got some grand ol’ Duke of Yorks, some floury yellow Colleens and a Scottish heirloom variety with dark purplish skin and purple ringed flesh, known as Shetland Blacks. These last, in particular, will be interesting. They are, I gather, floury and with good flavour, but reportedly turn a nasty grey colour on boiling. Alan Romans, cultivator of a great many heirloom potato varieties, has been quoted as saying that the Shetland Black is “Good boiled or mashed, but visually it is a bit unappealing. Blindfold the kids, whatever you do.” He could also have added that, at all costs, you should not present a plateful of these to your valentine. Not unless you care to blindfold them first too!